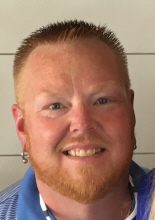 ADVANCE Mr. James Daniel "Jamie" Britt, 42, of Advance and formerly of Wadesboro died Sunday, June 16, 2019 in Wilmington. The family will greet friends Saturday, June 22, 2019 at Leavitt Funeral Home, Wadesboro, from 12:00pm until 1:30pm with the service following in the chapel with Rev. Scott Faw officiating. Jamie was born May 24, 1977 in Richmond County, NC son of Jimmy Ray "Red" Britt and Shirley Ann Williams Britt. He was a 1995 graduate of Anson High School and was employed with Elevate Roofing. To say he was an avid and enthusiastic UNC Tar Heel fan is an understatement. He enjoyed playing pool and simply having fun. He had a way with people, putting everyone at ease and willing to do anything for anyone. Jamie was blessed with a larger than life personality. He filled any room with love and acceptance of all people, and was friends with people from all walks of life. Surviving are his wife, Adele Ridenhour Britt; his children, Jamison Ryan Britt and Emily Jane Britt; his mother, Shirley Britt of Wadesboro; his father and step-mother, Red and Judie Britt of Lilesville; his brother and sister-in-law, Tommy Dale and Trina Britt of Concord; his nephew and niece, Travis and Aleksa and his brother-in-law, David Ridenhour of Advance. In lieu of flowers, memorials may be made to Special Olympics Davie County, with "In memorium of Jamie Britt" in the memo line. Checks may be mailed to or dropped off at 644 N. Main St., Mocksville, NC 27028. The arrangements are in care of Leavitt Funeral Home. Online condolences may be made at www.leavittfh.com
To order memorial trees or send flowers to the family in memory of Jamie Britt, please visit our flower store.