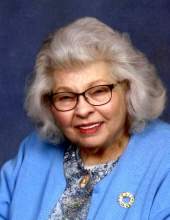 WADESBORO – On Friday, August 21, 2020, Mrs. Janet Gettier Hodges, 88, passed away peacefully at her home with her children around her bedside. There will be a Mass of Christian Burial at 11:00am Wednesday, August 26, 2020 at Sacred Heart Catholic Church with Father Jean Pierre Swamunu Lhoposo officiating. Interment will follow in Anson Memorial Park. The family will greet friends on Tuesday, August 25, 2020 from 5:00pm until 6:00pm at Leavitt Funeral Home with a rosary service following. Janet was born October 3, 1931 in Charlotte, NC and was a daughter of the late George Lewis Gettier and the late Hester Gertrude Peters Gettier. She was a 1949 graduate of O’Donoghue Catholic School which is now St. Patrick’s Cathedral and School in Charlotte. She worked as a secretary for General Electric in Charlotte until her first child was born and then she chose the greatest career possible and that was being a homemaker and stay at home mom, caring for her husband and 7 children. Janet was a very faithful and dedicated member of Sacred Heart Catholic Church in Wadesboro. Those left to cherish her memory are her children, Bill Hodges (Arturo Rodriguez) of Miami, FL, Kathy Kelly (Dale) of Lilesville, Robert Hodges of Asheville, Linda Tyson (Willie) of Polkton, Steve Hodges (Tammy) of Greer, SC and Carol Holloway of the home; her brother, Lawrence Gettier (Linda) of Raliegh; 12 grandchildren and 16 great-grandchildren with one on the way. In addition to her parents, she was preceded in death by her husband of 58 years, Alfred John Hodges in 2008 and her son, John Alfred Hodges in 2000. Janet will be remembered as a loving and devoted wife, mother, grandmother, and sister. She always greeted everyone with a sweet smile and twinkle in her eyes. .Special thanks to Sally Boss, her nurse, who became Janet's adopted daughter. Pam Williams her CNA, and to Community Home Care & Hospice. In lieu of flowers, memorials may be made to Sacred Heart Catholic Church or to Community Home Care and Hospice The arrangements are in care of Leavitt Funeral Home. Online condolences may be made at www.leavittfh.com
To order memorial trees or send flowers to the family in memory of Janet Gettier Hodges, please visit our flower store.

COVID 19 precautions, social distancing, masks and other precautions in place.

COVID 19 precautions, social distancing, masks and other precautions in place.