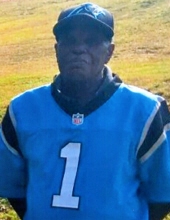 Wadesboro - Mr. Jasper Jones Sturdivant, son of the late Jasper and Pearline Lee Sturdivant, was born on February 11, 1952 in Marshville, NC Jasper, known to many as “JJ”, a loving husband, father, grandfather, brother, and dear friend, departed this life on Thursday, February 4, 2021 at Atrium Health’s Carolina Medical Center in Charlotte, NC. God worked it out for us all that he spent his last days doing what he loved most, being with his family. Jasper confessed Christ at a young age and joined New Grove Missionary Baptist Church. Jasper was known for his “you know what I mean” personality, always making people he came in contact with laugh, and always having a smile on his face. He always helped where he could, and he never met a stranger. He attended the public schools of Anson County, NC and was employed with Roof Tek in Marshville, North Carolina for more than 20 years prior to retirement. Jasper was married to Mrs. Shelby Tanner Sturdivant for over thirty years and together they have four children. He was preceded in death by several brothers and sisters. Jasper leaves to cherish his memories, his wife, Shelby of the home; two sons, Dequon Sturdivant of the home and LaGerald (Laquitta) Tanner of Concord, NC two daughters, Alexis Lee of Charlotte, NC and Wendy Burns of Wingate, NC; four grandchildren and one special grandson, Jaikeem Sturdivant. He also leaves, seven sisters, Pearlie Hunter of Norwood, NC, Alberta (Rev. Fred) Leak, Sylvia (Mike) Allen, Marion (Emmanuel) Lauderdale all of Wadesboro, NC, Josephine (Roy) Collins of Richland, GA, Beverly Huntley and Arleen Hall both of Monroe, NC; two brothers, Freddie Sturdivant of Wadesboro, NC and Nelson (Wornetta) Hamilton of Indian Trail, NC; six sisters-in-law, Brenda Diggs of Lilesville, NC, Mary Maske, Juretha Tanner and LeeAnn Watson all of Wadesboro, NC, Edith Sturdivant of Ansonville, NC and Georgia Sturdivant of Charlotte, NC; seven brothers-in-law, Jessie Tanner and Eddie Tanner both of Wadesboro, NC, Larry (Frankie Jane) Tanner of Morven, NC, Tony Diggs, Keith Diggs and Roger Tanner all of Lilesville, NC and Louis Tanner of Polkton, NC; his nieces and nephews all of whom were very special to him, a host of aunts, uncles, cousins, and friends. Funeral services will be 3:00 pm Friday, February 12, 2021 in the Chapel of Leavitt Funeral Home. Interment will follow in New Grove Church Cemetery in Polkton. Family and friends may pay their respects from 2:00 pm until 6:00 pm Thursday, February 11, 2021, at the funeral home.
To order memorial trees or send flowers to the family in memory of Jasper Jones Sturdivant, please visit our flower store.
Send a Sympathy Card

COVID 19 precautions in place - social distancing and wear masks at all times.