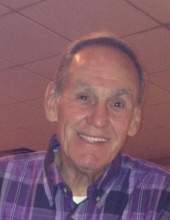 LILESVILLE – Mr. Jerry Wells Hinson, 78, passed away peacefully Wednesday, October 21, 2020 at Hospice of Union County in Monroe. Services will be 1:00pm Sunday, October 25, 2020 by the graveside in Eastview Cemetery in Wadesboro. The family will greet friends following the service at the cemetery. Jerry was born January 15, 1942 in Moore County, NC and was a son of the late Julius Terry Hinson and the late Carrie “Bit” Grooms Hinson. He was a 1960 graduate of Lilesville High School and retired from the CSX Railroad as conductor with 31 years of service. He was a member of the Samaritan Colony in Rockingham. Left to cherish his memories are his wife, Patricia Keaton Hinson; his children, Jeff Hinson of Lilesville, Mike Hinson (Amber) of Los Angeles, CA, David Hinson (Angie) of Concord and Mary Lynn Hinson of Charlotte; his sister, Nancy Adcock of Laurinburg; his step-daughter, Anna Smith of Rockingham; 8 grandchildren; 2 great-grandchildren; 1 step-grandson and 1 step-great-grandson. In addition to his parents, he was preceded in death by his first wife, Julia Mae Baker Hinson and his son, T. Mack Hinson. In lieu of flowers, memorials may be made to Samaritan Colony, 136 Samaritan Dr, Rockingham, NC 28379 or to Hospice of Union County, 700 W. Roosevelt Blvd., Monroe, NC 28110. The arrangements are in care of Leavitt Funeral Home. Online condolences may be made at www.leavittfh.com
To order memorial trees or send flowers to the family in memory of Jerry Wells Hinson, please visit our flower store.