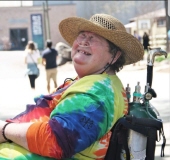 Gathering of Family and Friends

Jessie Sharp's obituary is being shared as a courtesy to her friends and family. On Wednesday, November 26, 1958, in Las Cruces, New Mexico, the world was honored with the birth of a little girl who would be named, Jessica Ruth Bartel. A somewhat magical existence would take place as this girl grew into adulthood and continued to make her mark on the world. Her mother was Mary Mize, she had a brother, James Bartell and nieces and nephews, Korey, Rachel and David all awaited her arrival in eternity. Jessie, as she would become known to those who love, as she did, unconditionally, met and married a man by the name of Craig Sharp. At the time of her exit from her earthly life, on Thursday, September 19, 2019, she and Craig would be married for 35 years. Craig and Jessie lived a rather simple life, accepting each other for the person they each were and their lives would be blessed with two beautiful children. Her daughter and son-in-law are, "Mo" and Sean Church; son and daughter-in-law are Christopher and Emily Sharp; Jessie made no questions about loving Easton Tyson as her grandson. Jessie shared a very close relationship with her nieces, Angela Bartell and Brittany Huthsing and husband, David and their children, Theo and Mia; and her nephew, Sam Steven Simpson; her sisters and brother are, Gloria Nimon, Stephanie Ennis, Valerie Cote and Merton "Benjamin" Bartel. She also has other nieces, nephews, great-nieces, great-nephews and all the blood kin, step and in-law adults required to make such a mixture of family members and a partridge in a pear tree. She would live her 60 years in Las Cruces, NM, Vallejo, CA, Charlotte, NC and her final years were lived in a place she loved, Murphy, in the North Carolina Mountains. She and Craig lived in a cabin in the mountains where she found much peace and solitude in the time she beat the odds of Hospice care. While in Charlotte, Jessie would become a member of One Voice Chorus, which is a LGBT, Allies and all welcoming chorus of people from all walks of life and municipalities surrounding Charlotte. She was a faithful member of the tenor section, holding her own among the male singers and doing her part to keep the spirit alive, all the while, singing and accepting those all around her without condition. She was a great advocate for the LGBT community and was among the first to welcome new singers to the One Voice family. While in later years, due to declining health, she was unable to sing in the chorus, it was then she supported the mission of OVC in financial giving, often sponsoring tickets for her friends to attend concerts as her gift to them. She believed in the lyrics from the song, "One Voice" which her chorus song often times. "I am one voice, I will not be silent, I will keep on singing til Im heard; we are one life, one hope, one choice, WE ARE ONE VOICE!" To say Jessie Sharp walked to the beat of her own drum would be a true statement and with that encouraging others to do the same and be their own person. Several years ago, she made her own plans for cremation, and at her gathering her family and friends are welcome to a "scoop" of her ashes as a remembrance. However, if one should happen to get "two scoops" that comes with raisins. At her request, there will be an "Already Gone Party" at Holy Covenant United Church of Christ, 3501 W W.T.Harris Blvd, Charlotte, NC 28269 on Saturday, October 5, 2019 from 4:00pm until 7:00pm with a time of sharing, music by One Voice Chorus of Charlotte and a time for toasts to her life well-lived. In true Jessie style, please come dressed in very vivid and bold colors, in fact, the brighter the better in hopes to make someone smile, just as she did. It is suggested, should anyone desire, remember Jessies life with a contribution to One Voice Chorus of Charlotte, PO Box 9241 Charlotte NC, 28299 or simply share a hug and word of encouragement to someone who needs a simply boost in spirit along lifes journey. Jessie dear, take wings just as the fairies you loved and spread your fairy dust all over the ones you love so they might feel your presence eternally. Fly high dear Jessie, fly high!
To order memorial trees or send flowers to the family in memory of Jessie Sharp, please visit our flower store.
Send a Sympathy Card

Gathering of Family and Friends