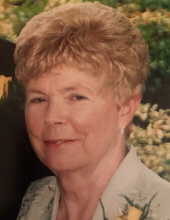 WADESBORO – Mrs. Joan Elaine Penird Porten, 78, died peacefully at her home on Monday, September 21, 2020. There will be a service to celebrate her life at 3:00pm Thursday, September 24, 2020 in the Chapel of Leavitt Funeral Home. The family will greet friends one hour prior to the service at the funeral home on Thursday and other times at the home. Joan was born September 5, 1942 in Auburn, NY and was a daughter of the late Floyd William Penird and the late Virginia Avery Hart Penird. She was a graduate of Auburn East High School and E. J. Myer Memorial Hospital School of Nursing. She worked as a registered nurse in New York for a number of years before she and her husband followed his dream of becoming a farmer. They moved to the Deep Creek Community of Wadesboro in 1973 and owned and operated Porten Farms. Joan loved being outdoors. She enjoyed hunting, fishing, playing golf, horses and cooking. She shot a hole in one at Twin Valley Country Club. Those left to cherish her memory of her high school sweetheart and husband of 59 years, Dick Porten; her children, Kelly Porten Ourth (John) of St. Louis, MO, Bill Porten (Becky) of Las Vegas, NV and Jack Porten (Kristi) of Wadesboro; her grandchildren, Theodore, Tess and McKinley; her beloved Cocker Spaniel, Belle and her extended family of the Porten’s and nieces and nephews. In addition to her parents, she was preceded in death by an infant son, Matthew Tyler Porten and her brother, Carl Penird. Her family wishes to express their heartfelt appreciation to Community Home Care and Hospice for the loving way in which they cared for Joan, the Grace Senior Center for the services they provided and to their neighbors and friends in the Deep Creek Community for the outpouring of love they have shown to her and the family. In lieu of flowers, memorials may be made to Community Home Care and Hospice, 1791 E Broad Ave., Rockingham, NC 28379. The arrangements are in care of Leavitt Funeral Home. Online condolences may be made at www.leavittfh.com
To order memorial trees or send flowers to the family in memory of Joan Elaine Penird Porten, please visit our flower store.
Send a Sympathy Card