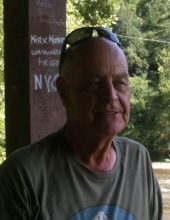 POLKTON – On Friday, December 4, 2020, Mr. Joe Leonard Thomas, 74, went to be with the Lord. Services will be 2:00pm Tuesday, December 8, 2020 by the graveside in Hopewell United Methodist Church Cemetery with Rev. Patrick Ledford officiating. Joe will lie in state in the narthex of the church from 1:00pm until 2:00pm Tuesday prior to the service. The family will greet friends from 6:00pm until 8:00pm Monday, December 7, 2020 at Leavitt Funeral Home. Joe was born October 7, 1946 in Anson County, NC and was a son of the late Ray Thomas and the late Lucy Threadgill Thomas. He was a 1966 graduate of Anson High School and worked with Anson County Schools for 34 years, retiring as custodian at Peachland Polkton Elementary School. He joined Hopewell United Methodist Church on the third Sunday in August 1980, the same day his son was Christened. He remained an active and faithful member of the church until his death. Joe also owned and operated a poultry farm for 20 years, retiring last year and worked as a security officer with API Security. His job with API was security at the Anson County Landfill, where he enjoyed visiting with those who came by. He never met a stranger and really enjoyed good conversations. Left to cherish his memory are his wife of nearly 52 years, Sue Harward Thomas; his daughter-in-law and her husband, Jenny and Donovan Evans of Monroe; his brothers and sisters-in-law, Clyde and Lois Thomas of Charlotte, Heath and Norma Thomas of Peachland; his Harward brother and sisters-in-law, Clinton and Jewel Harward of Peachland and Mary Jordan and Shirley Harward both of Polkton and his nieces and nephews and their families from both the Thomas and Harward families. In addition to his parents, he was preceded in death by his son, Joe Thomas, Jr., his sisters and brothers, Edna Broome (Harold), Ruby Horne, John Thomas and Richard Thomas (Janie) and his brother-in-law and sister-in-law, Robert Harward and Betsy Lanier (Bill). Memorials may be made to Hopewell United Methodist Church, General Fund, c/o, Susie McSwain, 424 Pork Rd., Peachland, NC 28133. The arrangements are in care of Leavitt Funeral Home. Online condolences may be made at www.leavittfh.com
To order memorial trees or send flowers to the family in memory of Joe Leonard Thomas, please visit our flower store.

COVID 19 precautions in place - social distancing and wearing masks at all times in the building.

COVID 19 precautions in place - social distancing and wearing masks at all times in the building.