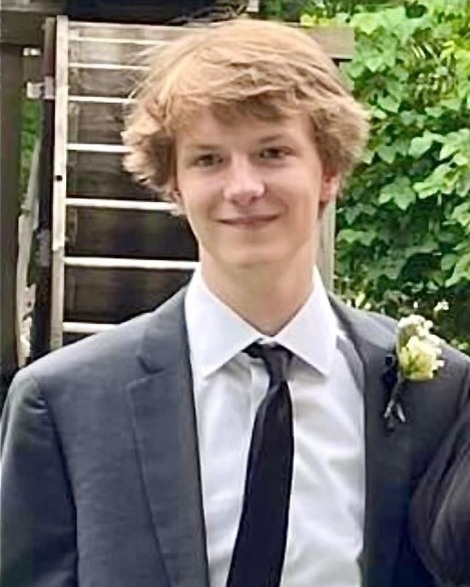 There will be a service to celebrate Thomas’ life at 2:00 PM Friday, September 23, 2022 in the Chapel of Leavitt Funeral Home with Dr. Harry Workman officiating.

The interment will be private at a later date in Griffin Cemetery in Polkton.

Thomas was born October 20, 2003 in Matthews, NC and was the son of Amy Brock Harrington Lamb and John Thomas Lamb, III. He was a 2022 graduate of Northwest Guilford High School and was currently a student at Guilford Technical Community College where he was also employed in the athletic department. He was fascinated with history and never turned down a time for sushi!

He was quite interested in sports and enjoyed playing basketball, tennis and golf. Through the years, he has attended basketball camps at Duke. With that being said, it is no doubt John Thomas’ affinity and faithfulness to Duke Basketball, although his family was not.

Thomas enjoyed times shared with this family, especially farming with his grandfather in Ansonville and going fishing with his Mama Wim. Mama Wim not only taught him to fish, she also taught him to clean the fish and how to eat them, tail first! Among his greatest moments in life, though, was hanging out with his cousins and friends.

Those left to cherish his memory are his parents, Amy and John; his four-legged brother, Ruggy; his half-sisters, Carson Lamb of Raleigh and Hunter Lamb of Charlotte; his grandparents, Bucky Harrington and Tina of Ansonville and John “Red Dog” Lamb, Jr., and Dena Copland of  Chapel Hill; his aunts and uncles, Sandy Harrington of Lexington, SC, Mike Harrington of Ansonville, David Drake of Concord, Ashley Drake of Wadesboro, Joy Drake of Peachland and Trish Naylor and Shane of Summerfield; his extended family of great-aunts and great-uncles and cousins, all of whom were a very close part of his life and his many Greensboro friends, classmates and teammates.

He was preceded in death by his grandparents, Wilma Brock Drake and Hank Drake and Marian Parker.

The family is most grateful for the outpouring of love and concern shown during this time and for everyone who has played an integral part in Thomas’ life.

To order memorial trees or send flowers to the family in memory of John Thomas Lamb, IV, please visit our flower store.
Send a Sympathy Card

Following the service friends and family are invited to the home of the late Wilma Brock Drake for a time of fellowship.