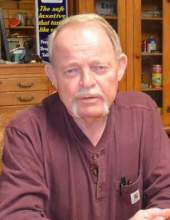 LILESVILLE – On Tuesday, November 3, 2020, a giant of a man, Joseph Michael “Mike” Goodwin entered rest. Services will be 11:00am Friday, November 6, 2020 by the graveside Savannah United Methodist Church Cemetery. The family will greet friends from 5:00pm until 7:00pm Thursday, November 5, 2020 at Leavitt Funeral Home. Mike was born August 25, 1952 in Anson County, NC and was a son of the late Joe Sharpe Goodwin and the late Sadie Ross Downer Goodwin. He was a 1970 graduate of Bowman High School and it was then he started his own business, which he owned and operated until his passing. He was a self-made man and businessman. He owned and operated Mike Goodwin Logging for 50 years, JMG Land and Timber Company and owner of Circle G Arena in Lilesville, where for many years Lilesville’s Fourth of July Celebration was hosted. He was also the developer of Spencer’s Pointe community on the Pee Dee River in Lilesville. Mike enjoyed going to auctions and was a collector of antiques, especially gas pumps and signs. He was a farmer and enjoyed spending time on his farms and for many years was known for baling hay. One of his favorite past times was restoring old barns. He was a real people person and an amazing businessman. He really enjoyed spending time with his family and friends at his barn and always looked for an occasion to get together. He believed in local businesses and supporting them and did all he could for the good of Anson County’s economy. Mike grew up in Olivet United Methodist Church and cherished his rich family history there. A devoted family man, those left to cherish his memory are his wife, Debbie Sheppard Goodwin; his children, Lindy Goodwin and Travis Goodwin (Kristie) both of Lilesville; his step-daughter, Monica Phillips (Ian) of Wendell; his grandchildren, Lane Goodwin, Josey Beverly, Raylyn Barnhill, Landis Goodwin, and Payson Goodwin all of Lilesville; his sisters and brother, Millie Burkett (Jerry) of Mt. Pleasant, Mary Ellen Goodwin (Freddy) of Holden Beach and Donnie Goodwin of Rockingham and his nieces and nephews and their families. In addition to his parents, he was preceded in death by his brothers and sister, Kress Goodwin, Buddy Goodwin and Beverly Freeman. In lieu of flowers, the family suggests that memorials be made to a local Anson County charity of the donor’s choice. The arrangements are in care of Leavitt Funeral Home. Online condolences may be made at www.leavittfh.com
To order memorial trees or send flowers to the family in memory of Joseph Michael "Mike" Goodwin, please visit our flower store.