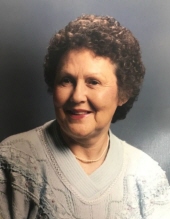 WADESBORO Mrs. Katherine Story Waddell, 90, went to sleep and awoke in Heaven on Saturday, July 28, 2018 at her home. There will be a memorial service at 11:00am Wednesday, August 1, 2018 in the Chapel of Leavitt Funeral Home. The family will greet friends following the service at the funeral home and other times at the home of Leigh and Mike Wagner. Katherine was born December 9, 1927 in Anson County, NC, the youngest child born to the late Alonzo Jones Story and the late Annie Goodwin Story. She was a long-time member of First Baptist Church, Wadesboro. Surviving are her children, Bruce E. Waddell, Freddie Holley and Leigh (Mike) Wagner all of Wadesboro; her grandchildren, Michael Wagner, John Wagner, James Michael Martin, Charles Holley and Mary Katherine Holley and 4 great-grandchildren. In addition to her parents, she was preceded in death by her husband, Fred Lee Waddell and her brothers and sisters, Kenneth Story, Joe Story, Francis Story, Mary Lee High, Lucy Odom, Sara Anderson and Monte Streater. In lieu of flowers, memorials may be made to First Baptist Church, P.O. Box 423, Wadesboro, NC 28170. The arrangements are in care of Leavitt Funeral Home. Online condolences may be made at www.leavittfh.com Visitation following the service: 2036 Morven Road Wadesboro, NC 28170 Wednesday August 1, 2018 Leavitt Funeral Home
To order memorial trees or send flowers to the family in memory of Katherine Story Waddell, please visit our flower store.