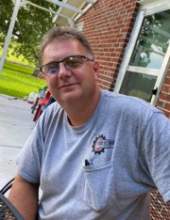 POLKTON – On Saturday, August 15, 2020, Kenneth “Kenny” Eugene Streater, 50, passed away at his home. There will be a memorial service at 7:00pm Thursday, August 20, 2020 in the Chapel of Leavitt Funeral Home. The family will greet friends Thursday, from 5:00pm until 7:00pm at the funeral home and other times at the home. The memorial service will be on Facebook live on the Leavitt Funeral Home Facebook page. Kenny was born May 27, 1970 in Chesterfield County, SC and was a son of the late Harvey C. “Hobby” Streater, Jr. and the late Mary Jane Lee. He was employed with Union Mechanical Service in Monroe as an HVAC Service Technician. Those left to cherish his memory are his wife of 22 years, Misty Johnson Streater; his daughters, Mary Elizabeth “Beth” Cunningham of Wadesboro, Brittney Lee Streater and Emma Bland Streater both of Polkton; his grandson, Carter Grey Cunningham of Wadesboro; his brothers and sisters, William Streater and Maggie Rose Streater both of Wadesboro, Jamie Streater of Myrtle Beach, SC and Ginny Sellers of Hamlet; his step-mother, Susan Streater of Wadesboro; his mother-in-law, Susie Melton Johnson of Peachland; his sister-in-law, Christy Johnson, who he called his “sister-out-law” of Peachland; his aunts and uncles, Barbara Helms (Larry) of Marshville; Sherry Ponds (Franklin) of Ansonville, Joey Lee (Kyra) of Murrell’s Inlet, SC and Shirley Kalk of Reno, NV. In addition to his parents, he was preceded in death by his grandparents, Joe and Betty Jo Hill Lee and Harvey C. and Virginia Thompson Streater. Kenny will be remembered as a loving and devoted, husband, father, papa, son, brother, nephew and friend. He was an excellent provider for his wife and daughters and would do anything to help anyone. Some of his favorite past-times were, hunting, watching Dallas Cowboys football, listening to various genres of music, being outdoors, having a garden, NASCAR racing, and grilling food for his family and friends. He took great pride in is work at Union Mechanical and tried his best to take care of the needs of his customers. In lieu of flowers, please consider a contribution to assist with funeral expenses by doing so online or by mail to Leavitt Funeral Home, P.O. Box 274, Wadesboro, NC 28170. The arrangements are in care of Leavitt Funeral Home. Online condolences may be made at www.leavittfh.com
To order memorial trees or send flowers to the family in memory of Kenneth "Kenny" Eugene Streater, please visit our flower store.

Social distancing, masks and other COVID 19 precautions will be in effect.

Social distancing, masks and other COVID 19 precautions will be in effect.