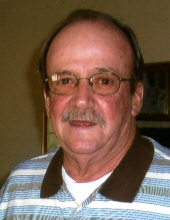 Wadesboro – Mr. Lanny Melvin Lewis, 77, passed away peacefully at home after being encouraged by family that it was time for him to go on home. A memorial service to celebrate his life will be held at 2:00PM Sunday, June 13th, at Leavitt Funeral Home with Rev. Rob Washington officiating. The family will greet friends following the service. Born October 13, 1943 in Anson County, Lanny was a son of the late Frank Washington and Ruth Eloise Thompson Lewis. Following his graduation from local schools, he went to work as a telephone lineman. Lanny caught on with the Home Telephone Company as a lineman in Moncks Corner, SC where he worked for nearly 20 years, until his health forced him to retire. An organized perfectionist, Lanny was an overachiever when it came both to his work and to his personal life. His home had to be immaculate with everything in order and in its proper place. He was a guru in the art of fixing and repairing things that were broken or no longer worked. Lanny also loved riding motorcycles and most anything to do with water – especially fishing and boating. Survivors include: three children, Lanora Bayer (Dave) of Tuscaloosa, AL, Lorraine Kifer (Ray) of Wadesboro, and Lanny Lewis II of N. Myrtle Beach, SC; his grandchildren whom he dearly loved, Jessica (Jeremiah) Woodall, Jordan Hannah, Renee Kifer, Ray Kifer Jr., Emily Sekula, Stephanie Lewis, Samantha Lewis, and Morgan Bayer; and 12 great-grandchildren. Also surviving are two brothers, Larry Lewis (Mary) of Pensacola, FL, and Trailor Lewis (Linda) of Hartsville, SC; and a loving sister, Lynn Lee (James David) of Wadesboro, NC; and a number of nieces and nephews and great-nieces and great-nephews; and his most loved special four-legged companion, Sam. The family suggest memorials be made to El Bethel Baptist Church, 532 McRae Ave, Wadesboro, NC 28170.
To order memorial trees or send flowers to the family in memory of Lanny Melvin Lewis, please visit our flower store.
Send a Sympathy Card