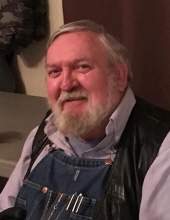 PEACHLAND - Peachland - On Sunday, February 21, 2021, Mr. Larry Eugene Horne, 70, went to be with the Lord at Atrium Health Union in Monroe. Funeral services will be 11:00am Thursday, February 25, 2021 in the Chapel of Leavitt Funeral Home in Wadesboro. Interment will follow in Peachland Cemetery. The family will greet friends Wednesday, February 24, 2021 from 6:00pm until 7:30pm during an informal visitation at the funeral home. Larry was born January 9, 1951 in Richmond County, NC and was a son of the late Albert Frank Horne and the late Margaret Louise Snead Horne. He was a 1969 graduate of Forest Hills High School and worked for several years with Yale Norton in Monroe and worked in mobile home set up and construction. He attended Mt. Carmel Baptist Church in Peachland. Those left to cherish his memory are his children, Terry Horne (fiance' Arely Lopez) of Monroe, Amy Thomas (Jeremy) of Pageland, SC, and Steven Horne of Matthews; his grandchildren, Kristen Horne of Monroe, Dylan Aldridge (fiancé, Kayla Laney), Breanna Thomas and Hailey Thomas all of Pageland, SC, and Stephanie Horne of Weddington; his sisters, Wanda Parker and Sandra Watkins (Thomas) both of Peachland, his sister-in-law, Connie Horne of Peachland and his nieces and nephews and their families. In addition to his parents, he was preceded in death by his brother and sister, Harris Horne and Teresa Campbell and his brother -in-law, Billy Parker. Larry was a simple man who enjoyed the simple things in life. He always wore overalls and a leather vest. Talking and visiting with is family and friends was a true high light of his life. In lieu of flowers, memorials may be made to Peachland Cemetery, Peachland, NC 28133. The arrangements are in care of Leavitt Funeral Home and online condolences may be made at www.leavittfh.com
To order memorial trees or send flowers to the family in memory of Larry Eugene Horne, please visit our flower store.