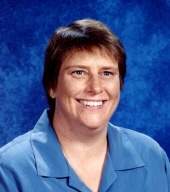 On Friday, October 12, 2018, Laura Frances Hasty, devoted daughter, sister, aunt, friend, co-worker, and community leader entered her forever heavenly home, no doubt hearing, "Well done, thy good and faithful servant!" Laura was born on February 5, 1964 to Claude and Betty Davis Hasty. She was known for her fun-loving, adventurous and only slightly mischievous personality. Blessed with an uncanny ability to bring joy and laughter to any situation, her snappy one-liners and clever comebacks were cherished and appreciated by all. Growing up in a caring, supportive family in the town of Peachland, North Carolina, Laura attended Anson County Schools. As a teenager, she enjoyed athletics, both as an NC State fan, but especially playing church league softball in which she became popularly known as "Willie" for her amazing underhanded out fielding skills. Laura also enjoyed being a member of the Anson County 4-H club. She won numerous competitions and held several leadership positions. Laura, also became a "Daughter of the King" when she accepted Jesus Christ as her Lord and Savior. She was baptized on March 13, 1978 and became a life-long member and servant at Peachland Baptist Church, where she held numerous positions including Vacation Bible School Director, Fall Festival Coordinator, and Technical Director, handling the audio and video needs. As a 1986 graduate of Wingate College, Lauras degree in Business served her well while working several years in the office of B.C. Moore & Son, a local department store chain. Upon the stores closing, Laura began to work for the Department of Social Services, where she diligently advocated for the needs of Anson County citizens, but Laura found her real passion when she began to work for the Anson County School System. Because of her amazing love for young people and strong desire to see them succeed, she fell perfectly into her roles as data manager, bookkeeper, secretary, and of course "Den Mother" to the students of Anson New Technology High School. For ten years "Mama Hasty" did everything the principal would "allow" to guide and support the students toward completing their most valuable educations. Though stern at times, none could deny her unconditional love. Laura continued in this care and compassion for both student and staff as she moved into her most recent clerical role at Anson High School, offering a welcoming, friendly face to all who entered the main office. Her hard work and dedication earned her the Para-Professional of the Year award on more than one occasion. This servants heart also carried over into other areas of the community. For someone who never had children of her own, Laura positively influenced the lives of so many children. As a member of the Anson Athletic Association, Laura handled multiple needs at the Field of Dreams Athletic Complex in Polkton, always making sure the children had a safe, organized place to play sports and the spectators always had concessions to enjoy. As a board member for the Peachland Development Corporation, she ensured that children and families had a place to enjoy swimming and relaxing on hot summer days. Laura also served on the Peachland Town Council and took part in the Community Watch program with the great desire that Peachland continue to be a wonderful place to live. Though Laura was well-known in community, nothing was more important to her than spending special quality fun time with her family. She was preceded in death, by her father, Claude Hasty. Living in the home is her mother and best buddy, Betty Davis Hasty. Beloved siblings and spouses include Claudia Gabriel, (Chuck) of Virginia, Ricky Hasty, (Paulette) of Wadesboro, Jennifer Ricketts, (Kevin), of Peachland. Laura was also the coolest aunt ever to her nieces and nephews; Chris Nicholson, (Lisa) of Virginia, Shannon Miller, (Shane) of Arizona, Kimberly Sambaiew, (Peter) of Arizona, Charlie Hasty, (Amy Davis), Seth Ricketts, (Mallory Ridgeway), Zach Ricketts, (Cortney Thomas). Great nieces and nephews include Brooke and Ryan Miller, Hayden Sambaiew, and the newest family member Salem Ricketts. Laura was also a warm-hearted caregiver to several feline fur babies. Laura lived her life in such a way, that her passing has now left a huge void in the all the lives of those she touched. Though short by age standards, Lauras life was truly full and rich in ways of the Lord, always using her gifts and talents to serve the church, the workforce, the community and her family. Funeral services will be 2:00PM Tuesday, October 16, 2018 in Peachland Baptist Church. Interment will follow in Peachland Cemetery. The family will greet friends Monday evening from 6:00PM until 8:00PM at Leavitt Funeral Home in Wadesboro. Memorials may be made to Peachland Baptist Church, PO Box 146, Peachland, NC 28133.
To order memorial trees or send flowers to the family in memory of Laura Frances Hasty, please visit our flower store.