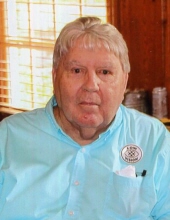 WADESBORO - Lawrence Stancil Ratliff, Jr., 82, passed away peacefully at his home on Monday, March 8, 2021. Funeral services will be 11:00 am Wednesday, March 10, 2021, at Forestville United Methodist Church in Lilesville. Entombment will follow in Anson Memorial Park Mausoleum. Family and friends may pay their respects by signing and register during a time of viewing from 3:00pm until 6:00pm Tuesday, March 9, 2021. Stancil was born December 10, 1938, in Anson County and was a son of the late Lawrence Stancil Ratliff and the late Mary Saline Hinson Ratliff. He was a graduate of Wadesboro High School and a member of Forestville United Methodist Church. He owned and operated Ratliff Trucking and Grading for 50 years. Surviving are his wife of 51 years, Doris Jordan Ratliff; his sisters, Jean Williams, Vicky Howell, and Linda Ratliff all of Wadesboro and Joanne Clark of Lilesville; his sisters-in-law and brothers-in-law, Sara and Jim Aldridge of Indian Trail, Joyce and Pete Pegram of Henderson, Vera and Glenn Trexler of Wadesboro, Kathy and Claude Canipe of Clayton Kay Jordan of Maiden and Haywood Lee of Mint Hill and his nieces and nephews and their families. In lieu of flowers, memorials may be made to Forestville United Methodist Church Cemetery Fund, c/o Joanne Clark, 1781 Clark Mountain Rd., Lilesville, NC 28091. The arrangements are in care of Leavitt Funeral Home and online condolences may be made at www.leavittfh.com
To order memorial trees or send flowers to the family in memory of Lawrence Stancil Ratliff, Jr., please visit our flower store.
Send a Sympathy Card

COVID 19 precautions - social distancing and wearing face masks while in the funeral home.

COVID 19 Precautions in place - social distancing and wearing masks at all times in the church building.