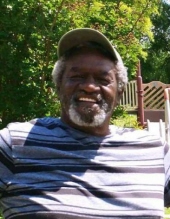 Wadesboro - On Saturday, July 20, 2019 at Atrium Health Anson in Wadesboro, NC, Mr. Lee Edward Staton, age 72, when home to be with God. He was born October 7, 1946 in Union County, NC and was a son of the late Wendell P. Nixon and the late Vinnie Lucille Staton Nixon. Lee Edward was educated in the public schools of Union County and graduated from Winchester High School. He worked for a number of years as a Brick Mason. He was a veteran of the United States Army, having served during the Vietnam War. He was the recipient of the National Defense Service Medal, Vietnam Service Medal, Vietnam Campaign Medal, Good Conduct Medal, Combat Infantrymans Badge and recognized as an Expert Marksman Rifle Sharpshooter. Surviving are his wife, Levone Evans Staton; his son, Bradford Staton (Angie Robinson) of Wadesboro; his grandchildren, Breiasa Staton, Dyquan Marsh, Jarvis Marsh, Jasmine Winnegan and Qashannon Winnegan; his brother and sisters, Johnny E. Staton (Johnnie Mae), Edna M. Chambers, Tressa A. Quinn, Carrie N. Shaw (Bobby), Tiney E. Blakney (Roger) and Catrain L. Hammonds (Irvin) all of Monroe; his brother-in-law and sisters-in-law, David Evans, Mary Smith and Wincie Brown all of Wadesboro and his nieces, nephews and other relatives and friends. In addition to his parents, he was preceded in death by his son, Lee Thomas Staton and his sister, Shirley Allen. Funeral services will be 3:00pm Thursday, July 25, 2019 in the Chapel of Leavitt Funeral Home. Interment will follow in Westview Memorial Park.
To order memorial trees or send flowers to the family in memory of Lee Edward Staton, please visit our flower store.