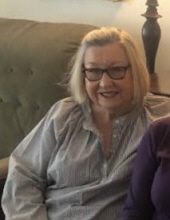 LILESVILLE – Mrs. Linda Sellers Usrey, 77, died Tuesday, February 11, 2020 at Atrium Health Union in Monroe. Funeral services will be 11:00am Friday, February 14, 2020 in the Chapel of Leavitt Funeral Home. Interment will follow in Gum Springs Baptist Church Cemetery. The family will greet friends Thursday, February 13, 2020 from6:00pm until 8:00pm at the funeral home and other times at the home. Linda was born February 4, 1943 in Anson County, NC and was a daughter of the late James Newberry Sellers and the late Mildred Kathryn Goodwin Sellers. She was a member of the first graduating class at Anson High School in 1961. She worked for a number of years as the Library Assistant and Principal’s Secretary at Peachland Polkton School, as Purchasing Agent at Southern Fab in Polkton and later at Wade Manufacturing as the receptionist. In her words, she was a “Professional Telephone Talker.” Surviving are her son, Johnny Lee Usrey (Susan) of Lilesville; her grandchildren, Jordan Maness (Michael) of Polkton, Bryan Usrey and Jesse Usrey both of Lilesville; her great-grandchildren, Jon Michael Maness and Ford Maness; her sisters and brother, Judy Horne (Don) of Peachland, Frances Burroughs (Jabie) of Lilesville and James Sellers of Robbins; her sister-in-law, Vickey Clark of Lilesville; her aunt and uncle, Peggye Talent (Bill) of Norwood and Harold Goodwin (June) of Yulee, FL and her nieces and nephews and their families. In addition to her parents, she was preceded in death by her husband, John Barry Usrey and her son, Jeffrey Dean Usrey. Linda’s family wishes to thank the staff at Atrium Health Union for the care they provided her. In lieu of flowers, memorials may be made to Gum Springs Baptist Church Cemetery Fund, c/o, Sarah Harrington, 1364 Hailey's Ferry Rd., Lilesville, NC 28091. The arrangements are in care of Leavitt Funeral Home. Online condolences may be made at www.leavittfh.com
To order memorial trees or send flowers to the family in memory of Linda Sellers Usrey, please visit our flower store.