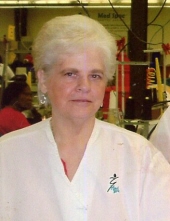 WADESBORO – On Monday, October 19, 2020, Mrs. Louise Hudson Carpenter, 75, entered into eternal rest and peace. There will be a memorial service at 11:00am Thursday, October 22, 2020 in the Chapel of Leavitt Funeral Home with Rev. Wayne Gathings officiating. The family will greet friends following the service. Louise was born October 20, 1946 in Anson County, NC and was a daughter of the late Benjamin Ingram Hudson and the late Madie Viola Hildreth Hudson. She worked for a number of years at Unity Knitting Mills and later retired from Medical Specialties. She had also worked at Sam’s in Wadesboro and Welika Lake Restaurant as a cook. Those left to cherish her memories are her sons, Kenny Carpenter and Jeff Carpenter (Amanda Chewning) both of Wadesboro; her grandsons, Nicholas Carpenter of Chesterfield, SC and Tripp Carpenter of Wadesboro and her sister, Sue Boyer (Bud) of Wadesboro. In addition to her parents, she was preceded in death by her husband, Floyd Carpenter and her brothers, Wayne Hudson and Ben “Doodle” Hudson. In lieu of flowers, please consider a gift to assist with funeral expenses, Leavitt Funeral Home P.O. Box 274, Wadesboro, NC 28170 or online by choosing the Crowdfunding option on the obituary page. The arrangements are in care of Leavitt Funeral Home. Online condolences may be made at www.leavittfh.com
To order memorial trees or send flowers to the family in memory of Louise Hudson Carpenter, please visit our flower store.