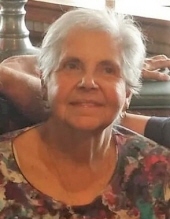 WADESBORO Mrs. Louise Marsh Lyons, 77, passed away Wednesday, September 19, 2018 at Wadesboro Health and Rehab Center in Wadesboro. Her passing was a peaceful and beautiful transition for her and her family. She was loved dearly by all who knew her. The family will greet friends at 10:00am Saturday, September 29, 2018 at Leavitt Funeral Home, Rev. Dr. Sarah Kalish will officiate a memorial service in the chapel at 11:00am A private inurnment will be in Bethel Cemetery in Wadesboro. Lou was born May 18, 1941 in Anson County, NC a daughter of the late Thomas E. Marsh and the late Lillie Mae Stroud Marsh. She had worked for a number of years as a travel agent and was a member of First United Methodist Church, Wadesboro. Surviving are her daughter, Marti Ackerman of Denver, CO; her brothers and sisters-in-law, Tom and Ginny Marsh of Sevierville, TN and Roger and Kathleen Marsh of Greensboro; her nieces, nephew, cousins, aunts, and uncles and their families. In addition to her parents, she was preceded in death by her husband, Byron Clifford Lyons and her brother, Elisha Stroud "Buster" Marsh. In lieu of flowers, memorials may be made to First United Methodist Church, 118 E. Morgan St., Wadesboro, NC 28170 or to Bethel Cemetery Fund, c/o, Marjorie Leonard, P.O. Box 374, Morven, NC 28119. The arrangements are in care of Leavitt Funeral Home. Online condolences may be made at www.leavittfh.com
To order memorial trees or send flowers to the family in memory of Louise Marsh Lyons, please visit our flower store.