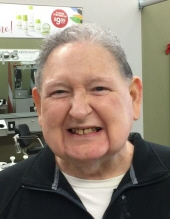 NORWOOD Mr. Mabon McNeill Kimrey, 77, of Norwood, died Wednesday, March 7, 2018 at Woodhaven Court in Albemarle , North Carolina. There will be a memorial service for him Sunday, March 11, 2018 at First United Methodist Church, Norwood at 3:00pm with Rev. Bill Roberts and Rev. Bob Cauble officiating. The son of Charlie and Ruth Alexander Kimrey, he worked at Young Manufacturing Company from the time he graduated high school until its closing. He then went to work for Norwood ABC Store, eventually becoming manager there. He worked there until his retirement, at which time he built a large kitchen, a free standing building, and he and his wife had a stint at catering. Mabon was a gentle soul and a very patient man. His grandchildren, the apples of his eye, speak fondly of the many activities they enjoyed doing with him, among them, cooking, tinkering, gardening, and creating pieces of woodwork. They adored their "Gumps", as they affectionately called him. He taught them many things. He is survived by his wife of more than fifty years, Judi Black Kimrey; his son, Neill Kimrey, of Norwood; his daughter, Beth Kimrey Elder, and her children, Alex Elder and Harris Elder, of Albemarle. Surviving him also are a sister, Lorna Kimrey Massey (Kenneth) of Norwood, North Carolina; a brother, Bryce Kimrey (Alice) of Cornelius, North Carolina; and three nephews and two nieces. The family will be at the home of his daughter, Beth Kimrey Elder, on Highway 138 in Albemarle and following the service on Sunday in the church fellowship hall. The family requests that in lieu of flowers, memorials be made to Youth Ministry of Norwood First United Methodist Church, PO Box 948, Norwood, NC 28128. The arrangements are in care of Leavitt Funeral Home. Online condolences may be made at www.leavittfh.com . Visitation following the service: 208 Pee Dee Avenue Norwood, NC 28128 Sunday March 11, 2018 First United Methodist Church, Norwood
To order memorial trees or send flowers to the family in memory of Mabon McNeill Kimrey, please visit our flower store.
Send a Sympathy Card