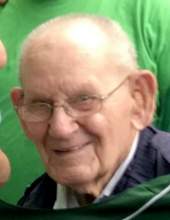 Charlotte-Mack Douglas Hatcher, 100, died October 1, 2020 at the home of his daughter in Charlotte. He was born July 25, 1920 in Lilesville, NC to Sallie and Sim Hatcher and was a graduate of Lilesville High School. Mack was a World War II veteran, honorably serving in the U.S. Army Air Corps first as a turret gunner and then as a communications technician in the US and Italy. In 1944, he married his high school sweetheart, Pauline Dawkins, and they settled in their hometown of Lilesville where he owned and operated Hatcher’s Exxon until his retirement. Mack and Pauline were married 67 years until her death in 2012. Before her death, they donated property to the town of Lilesville for a public park. Mack is survived by his daughter, Dale Carpenter, four grandchildren, Christopher, David, and Andrew Carpenter and Emily Hamilton, and nine great-grandchildren. Mack was a part of many of their greatest milestones, and had been an engaged and supportive father, grandfather and great-grandfather throughout their lives. They are very happy to have been able to honor him on his 100th birthday with a socially distanced party attended by family and friends. Always an avid woodworker, Mack made many pieces of furniture, clocks, and other decorative items, which he enjoyed giving to friends and family. In later years, he showed his love for his grandchildren and great-grandchildren by making them toys and banks. In lieu of flowers, please consider making a donation to the charity of your choice. A graveside service will be 11:00am Saturday, October 10, 2020 at Anson Memorial Park in Wadesboro, NC with Rev. Teddy Lawson officiating. The arrangements are in care of Leavitt Funeral Home. Online condolences may be made at www.leavittfh.com.
To order memorial trees or send flowers to the family in memory of Mack Douglas Hatcher, please visit our flower store.