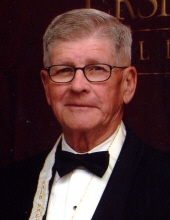 CHARLOTTE – Major James Boyce Hunter, Jr., U.S. Marine Corps Reserve, retired, an extraordinary member of an exceptional generation of Americans, died at his home in the early morning hours of Sunday, Jan. 3, 2021. He was 99. A graveside service with military honors will be held Saturday, Jan. 9, at 1 p.m. at Eastview Cemetery, Wadesboro, conducted by the Rev. Timothy Hushion, rector of Calvary Episcopal Church, Wadesboro, and himself a former Marine Corps officer. Due to the Covid-19 pandemic, the service will be private and there will be no visitation. Jim Hunter was a Charlotte native and lifelong resident, born Oct. 8, 1921, to Madeline Faires Hunter and James Boyce Hunter. For more than 80 years, he lived within a mile of the family home on Granville Road. His longevity came from his mother, who was 101 when she died in 1990. His upbringing was greatly influenced by the fact that he had three “mothers,” since his spinster maternal aunts, Carrie and Tot Faires, both nurses at Presbyterian Hospital, lived with the Hunter family. Jim graduated from Central High School, attended N.C. State College, and earned a degree in geology from the University of North Carolina at Chapel Hill in 1943. After graduation, he went on active duty with the U.S. Marines, completed Officer Training School at Quantico, Va., and was commissioned a 2nd Lieutenant. He was sent to the Southwest Pacific and assigned as a platoon leader with Company F, 2nd Battalion, 1st Marines, 1st Marine Division. His commanding officer was the most legendary of Marines, Col. Lewis B. “Chesty” Puller. In September 1944, he and his platoon were in the vanguard of the attack on Peleliu. He was in the first wave of the amphibious assault on the island, and led his 68-man platoon on the well-documented, mile-long charge across the Peleliu airfield under withering rifle, machine gun and mortar fire. More than 20 members of the platoon were killed or wounded in the airfield crossing. He was awarded the Navy Cross, second in rank only to the Medal of Honor, for the action that followed. The Navy Cross citation reads: “With only two-thirds of his command left after a day of heavy fighting, Second Lieutenant Hunter reorganized his men and continued the assault across an airport where, inspired by his daring leadership, the platoon succeeded in destroying three hostile positions which were holding up the advance of the company, and in inflicting heavy casualties on the Japanese. Although painfully wounded upon entering the barracks area north of the airport, he crawled forward to a hostile pillbox which was holding up the advance of his company, threw several grenades and killed six of the enemy before he became unconscious from loss of blood. By his cool courage and aggressive fighting spirit, Second Lieutenant Hunter contributed to the success of his Battalion's advance, and his valiant devotion to duty was in keeping with the highest traditions of the United States Naval Service.” He spent months aboard a hospital ship and in U.S. hospitals recuperating from his wounds. Upon return to active duty, he was assigned to the Marine Recruiting Office in Richmond, Va. In addition to the Navy Cross, Jim was awarded the Purple Heart, the World War II Victory Medal, the American Campaign Medal, the Asiatic Pacific Campaign Medal with Bronze Star, and the Presidential Unit Citation among many other decorations. After World War II, Lt. Hunter founded the first Marine Corps Reserve unit in Charlotte and served as its initial commanding officer. He retired from the Marine Corps Reserve with the rank of major. Returning to civilian life, he worked in real estate, joining Lex Marsh at Marsh Realty and later operating his own firm, Hunter Realty Company. He was very active in the community, a former member of the Charlotte Rotary Club and a member of the Charlotte Board of Realtors, chairing the Professional Standards Committee for many years, He was a vestryman and senior warden at St. Peter’s Episcopal Church, and was a trustee for the Presbyterian Hospital Foundation, serving as chairman of its Benevolence Committee for more than three decades. On Aug. 18, 1951, Jim married Anne Leak Wyatt of Wadesboro and they were happily married until Leak, or “Leakie” as she was known to family and close friends, died in 1996. He established a scholarship in her memory at Erskine College, which was founded by his ancestors. Immensely proud of his family heritage, Jim Hunter was an ardent supporter of all things Scottish. He was an active member of the St. Andrew’s Society and the Robert Burns Society, wore his kilt at every available opportunity, and was known to enjoy a taste of Scotland’s national whiskey. Jim Hunter was raised Presbyterian, was an active member of St. Peter’s Episcopal Church during his marriage, and later returned to his roots, a member of First Presbyterian Church of Charlotte at his death. Jim is survived by his niece, Anne Sparger Goodwin and her husband Bill of Laurinburg; his nephew Fred Sparger III and his wife Kandie of Wadesboro; great-nephew William C. Goodwin III, his wife Neal, and their children Virginia, William IV and Suiter of Raleigh; great-nephew and namesake James Sparger Hunter Goodwin, his wife Courtney, and their children James Jr., Duncan and Greer of Raleigh; and great-niece Margaret Sparger Westall and son J.W. Westall IV of Asheville. Jim Hunter’s family mourns his passing but finds great solace in the knowledge that he and his beloved Leakie are now reunited on the dance floor with Benny Miller, Count Basie or Kay Kyser providing the music. The family suggests that memorials be made to the Marine Corps Heritage Foundation, 18900 Jefferson Davis Highway, Triangle, VA 22172, or the Lineberger Comprehensive Cancer Center at UNC, 101 Manning Drive, Chapel Hill, NC 27514. Semper Fi! Leavitt Funeral Home of Wadesboro is in charge of arrangements.
To order memorial trees or send flowers to the family in memory of Major James Boyce Hunter, Jr., please visit our flower store.

Due to the continued COVID-19 risk, the family respectfully requests everyone attending funeral services wear a face covering and practice social distancing as much as possible.