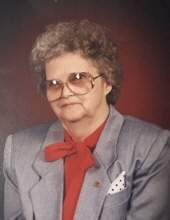 PLEASE NOTE - THE DAY AND TIMES HAVE CHANGED FOR THE SERVICE TO BE ON SUNDAY WADESBORO – Mrs. Marguerite Jordan Treadaway, 93, passed away peacefully on Wednesday, April 21, 2021 at Anson Health and Rehab in Wadesboro. Funeral services will be 3:00pm Sunday April 25 2021 in the Chapel of Leavitt Funeral Home with Rev. Jimmy Knotts officiating. Interment will follow in Anson Memorial Park. The family will greet friends one hour prior to the service at the funeral home on Saturday. Marguerite was born December 5, 1927 in Anson County, NC and was a daughter of the late Cleveland L. Jordan and the late Lillie Dean Jordan. She was a graduate of Lilesville High School and worked for several years at Abby Manufacturing in Wadesboro. Left to cherish her memory are her sons, Barry (Gertrude) Treadaway of Clio, SC, Steve (Jean) Treadaway of Patrick, SC and Ritchie (Lisa) Treadaway of Peachland; her grandchildren, Crystal (Larry) Springs of Blenheim, SC, Scotty (Nicole) Treadaway of Tega Cay, SC, Kevin (Crystal) Treadaway of Clio, SC, Nick Treadaway of Peachland, Nicole Treadaway of Wadesboro and Ian (Martha) Webber of Rexburg, ID; 8 great-grandchildren; 4 great-great-grandchildren; her brother and sisters, Cleveland Jordan, Jr., Jean Burris, Peggy (John) Long and Josephine Dickens all of Wadesboro; her sisters-in-law and brother-in-law, Eunice Jordan of Wadesboro, Myra McRae of Rockingham, Lois (HC) Thomas of Charlotte and Bruce Treadaway of Indian Land, SC. In addition to her parents, she was preceded in death by her husband, Donald Edward “Don” Treadaway and her brothers and sisters, Woodrow Jordan, Pete Jordan, Pauline Pegram, Louise Paul, Cleva Mae Hooks, Sarah Dickens and Mary Frances Diggs. The arrangements are in care of Leavitt Funeral Home and online condolences may be made at www.leavittfh.com
To order memorial trees or send flowers to the family in memory of Marguerite Jordan Treadaway, please visit our flower store.