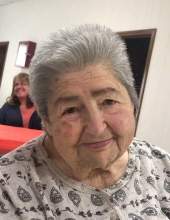 WADESBORO – On Sunday, December 13, 2020, Mrs. Mary Ann Streater Pigg, 85, went home to be with her Lord. Funeral service will be 5:00pm Thursday, December 17, 2020 in the Chapel of Leavitt Funeral Home with Rev. Jim Marshall officiating. The interment will be private on Friday at Anson Memorial Park. The family will greet friends one hour prior to the service on Thursday at the funeral home and other times at the home. Mary Ann was born August 28, 1935 in Anson County, NC and was a daughter of the late Calvin Thomas Streater and the late Annie Mae Bryant Streater. She was a graduate of Lilesville High School and was Salutatorian of her class. She retired from Hornwood in Lilesville and then went to work with her daughter at Soowett Treats Bakery in Wadesboro, working there for 15 years. She was a member of Wadesboro Christian Fellowship Church. Those left to cherish her memory are her children, Susan Pigg of Wadesboro, Helen Griffin (David) of Waxhaw, John Pigg, Jr. (Patti) of Wadesboro and Jimmy Pigg of Ardmore, OK; her grandchildren, Scott Griffin (Malissa) of Waxhaw, Megan Coleman (Jordan) of Manning, SC, Hannah Griffin of Waxhaw, Wesley Pigg, Jessica Paul (Brandon), Jackson Poulnott all of Wadesboro, Avery Pigg and Elisa Akins (Jared) both of Ardmore, OK; her great-grandchildren, Jace Griffin, Savannah Griffin and Kaison Akins; and her sisters, Jean Grecho of Lilesville and Josephine Jones of Cheraw, SC. In addition to her parents, she was preceded in death by her husband, J.W. Pigg and her brothers, willie Wineberger, Joe Streater and Calvin Streeter. In lieu of flowers, memorials may be made to the charity of the donor’s choice. The arrangements are in care of Leavitt Funeral Home. Online condolences may be made at www.leavittfh.com
To order memorial trees or send flowers to the family in memory of Mary Ann Streater Pigg, please visit our flower store.