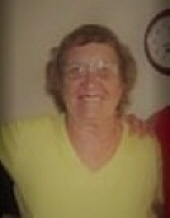 WADESBORO Mrs. Mary Grace Bullard Caudle, 79, died peacefully on Wednesday, December 12, 2018 at Woodridge Assisted Living in Monroe. Funeral services will be 2:00pm Friday, December 14, 2018 in the Chapel of Leavitt Funeral Home. Interment will follow in Anson Memorial Park. The family will greet friends one hour prior to the service at the funeral home. Mary Grace was born May 10, 1939 in Anson County, NC a daughter of the late Joe Bullard and the late Clara Mae Threadgill Bullard. She was retired from Little Cotton Mfg. in Wadesboro and a member of Wadesboro Pentecostal Holiness Church. Surviving are her children, Deborah (David) Seigler and Willie (Tonia) Caudle both of Lilesville; her grandchildren, William Seigler of Lilesville, Crystal Griffith of Indiana, Rebecca Caudle of Pageland, SC and John Michael Caudle of Wadesboro; her great-grandchildren, Brantley Joseph Treadaway and Raymond David Griffith and her brothers and sister, Charlie Bullard, Jake Bullard and Clara Mae Wilson all of Asheboro. In addition to her parents, she was preceded in death by her husband, John Frank Caudle. The family would like to thank the staff of Woodridge Assisted Living for the loving care they gave Mary Grace while she was a resident there. The arrangements are in care of Leavitt Funeral Home. Online condolences may be made at www.leavittfh.com
To order memorial trees or send flowers to the family in memory of Mary Grace Bullard Caudle, please visit our flower store.