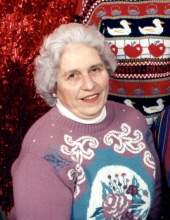 POLKTON Mrs. Melba Dyson McKenzie, 81, died Wednesday, January 16, 2019 at Hospice of Union County in Monroe. Funeral services will be 10:00am Saturday, January 19, 2019 at Polkton Baptist Church with Rev. John Greene officiating. Interment will follow in Williams Cemetery. The family will greet friends from 6:00pm until 8:00pm Friday, January 18, 2019 at the Polkton Depot and other times at the home of her daughter, Melissa Phillips in Wadesboro. Melba was born August 27, 1937 in Pender County, NC a daughter of the late Charles Wayland Dyson and the late Gracie Mae Corthren Dyson. She owned and operated Humpty Dumpty Day Care and cared for children in her home. She was a graduate of Polkton High School and a faithful member of Polkton Baptist Church where she has served as organist, pianist, Sunday school teacher, and custodian and had worked with Vacation Bible School. Surviving are her children, Alan (Monica) McKenzie of Mint Hill, Melissa (Gerald) Phillips of Wadesboro and Edward (Crystal) McKenzie of Polkton; her grandchildren, Holly Blackwelder (Dusty Efird) of Albemarle, Brooke Phillips (Jordan Lowery) of Wadesboro and Rachel Young and Philip (Ashley) Young both of Charlotte; her great-grandchildren, Destiny Blackwelder and Austin Blackwelder both of Albemarle; her sisters-in-law, Martha McKenzie of Marshville and Ann Frank of Hickory and her nieces and nephews and their families. Also surviving are her dear friends with the Polkton Womens Service Club, also known as The Depot Ladies: Bennie Napier, Janet White, Becky Wallace and Jean Wright. In addition to her parents, she was preceded in death by her husband, Tommy McKenzie and brother, Dale Dyson. The family would like to express their sincere appreciation to Atrium Health Anson and Hospice of Union County for the care they provided for Melba. In lieu of flowers, memorials may be made to Polkton Baptist Church, P.O. Box 10, Polkton, NC 28135. The arrangements are in care of Leavitt Funeral Home. Online condolences may be made at www.leavittfh.com
To order memorial trees or send flowers to the family in memory of Melba Dyson McKenzie, please visit our flower store.