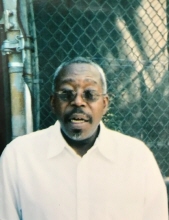 PEACHLAND Mr. Melvin Edward Roberts, 65, of Peachland and formerly of Brooklyn, NY, died Friday, August 3, 2018 at Carolinas Medical Center Union in Monroe. There will be a service to celebrate his life at 1:00pm Wednesday, August 8, 2018 in the Chapel of Leavitt Funeral Home, Wadesboro with Dr. Kay McDonald officiating. The family will greet friends following the service. Melvin was born May 29, 1953 in Brooklyn, NY a son of the late Simon Roberts and the late Elizabeth Jones Roberts. He attended Lefferts Junior High School in New York and graduated from Erasmus Hall High School in Brooklyn, NY. He joined the United States Marine Corps and served during the Vietnam War. He received the Good Conduct Medal, National Defense Service Medal, Meritorious Mast, Meritorious Unit Commendation, Certificate of Commendation, Sea Service Deployment Ribbon and the Navy Unit Commendation. His rank at the time of his honorable discharge after serving 12 years, was Gunnery Sergeant. Melvin worked for Ford Motor Company, New York City Fire Department (FDNY) as an EMT and retired as a Security Officer from SL Green in New York. He leaves to cherish his loving memories; his children, Porsha Alexander (Termaine Wilks) of Peachland, Curtis Roberts (Marsha McDonald) of Monroe and Michael Roberts of Staten Island, NY; his sister, Michele Roberts Young (William Young) of Brooklyn, NY; his sister-in-law, Judy Roberts of Pennsylvania; his grandchildren, ODarious Roberts, Damarious Roberts, Jeremiah Alexander, Jabari Alexander, Jarvis Alexander, Elijah Wilks and Wisdom Wilks all of Monroe; his niece and nephew, Liza Mayo and Charles Mayo both of Georgia and a host of friends from his service in the Marines and each place of employment. The family would like to express their sincere appreciation for the love, support and prayers during their time of bereavement. The arrangements are in care of Leavitt Funeral Home. Online condolences may be made at www.leavittfh.com Visitation following the service: 2036 Morven Road Wadesboro, NC 28170 Wednesday August 8, 2018 Leavitt Funeral Home
To order memorial trees or send flowers to the family in memory of Melvin Edward Roberts, please visit our flower store.