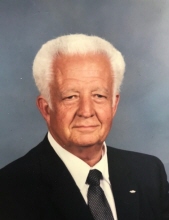 LILESVILLE Mr. Harley Merle Kinlaw, 91, died peacefully with his wife at his side on Saturday, December 29, 2018 at his home. He was a resident of Lilesville for 43 years. Funeral services will be 2:00pm Thursday, January 3, 2019 at Lilesville Baptist Church with Rev. Teddy Lawson officiating. The burial was Sunday, January 6, 2019 at Cross Creek Cemetery in Fayetteville. The family will greet friends from 5:00pm until 7:00pm Wednesday, January 2, 2019 at Leavitt Funeral Home. Merle was born June 2, 1927 in Cumberland County, NC and was the only son of the late Remie Crumpler Kinlaw and the late Hula Godwin Kinlaw. He served in the Merchant Marines and later enlisted in the United States Army, serving during World War II until he was honorably discharged. While in the Army, he was a Paratrooper and participated in 13 jumps. For 36 years, he was employed in the railroad industry, retiring from CSX Railroad in Hamlet as a Mobile Agent. He made many long lasting friendships while working with the railroad. He loved the Lord and accepted Jesus Christ as his Lord and Savior early in life and was a member of Lilesville Baptist Church. Merle was a 32nd degree Mason and Shriner and member of Kilwinning Masonic Lodge #64 in Wadesboro. A champion archer, he was also an avid bird hunter and fisherman. He and his wife found a lot of pleasure in sharing the fish he caught by hosting fish fries at his cabin for their church and railroad friends. He had just one love in his life, Sophia Manos, whom he met when they lived across the street from one another during their childhood. He is survived by his loving wife of 65 years, Sophia Manos Kinlaw of the home; his cousins, Jane Warfield and Jim Rosser both of Fayetteville and Belinda Godwin of Panama City, FL; his brother-in-law, Gus (Margaret) Manos of Charlotte and his niece and nephew, Marsha (Jim) Loar of Lake Jackson, TX and James Manos of Charlotte. The family would like to express their sincere appreciation to the staff of Anson Community Hospice, a division of Richmond County Hospice for the loving manner in which they cared for Merle. In lieu of flowers, memorials may be made to Lilesville Baptist Church, P.O. Box 305, Lilesville, NC 28091, or to The Masonic Home for Children at Oxford, 600 College St., Oxford, NC 27565 or to the Shriners Hospitals for Crippled Children, c/o Oasis Temple, P.O. Box 560666, Charlotte, NC 28256. The arrangements are in care of Leavitt Funeral Home. Online condolences may be made at www.leavittfh.com
To order memorial trees or send flowers to the family in memory of Merle Kinlaw, please visit our flower store.