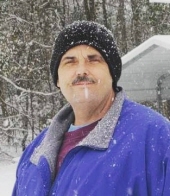 Mr. Michael Edward Lawhon, 59, joined his Lord on Saturday, January 5, 2019, from his home. A service to honor his life will be held by the graveside held at 12:00 Noon on Saturday, January 12, 2019, in Morven Cemetery. The family will greet friends following the service. Born in Anson county on March 9, 1959, Mike was a son of Edward "Buster" Lawhon and the late Shirley Price Lawhon Hough. He graduated from Bowman High School and worked for a period of time for Burlington Industries as a loom fixer. Prior to some health issues, he worked for Mr. Landon Scarborough and the S&L Bark Company. Mike enjoyed gardening but his two great loves were his family and his church. A simple man at heart, Mike was a deeply religious person who was a longtime member at N. Wadesboro Baptist Church. Survivors include: two children, Laura Ann Lawhon and Michael Edward Lawhon, Jr.; a brother, Mark Lawhon (Donna); and his father, "Buster" Lawhon. He was preceded in death by his beloved wife, Audrey Oxendine Lawhon, his mother and step-father, Shirley and James Hough, and a brother, Mitchell Lawhon.
To order memorial trees or send flowers to the family in memory of Michael Edward Lawhon, please visit our flower store.
Send a Sympathy Card