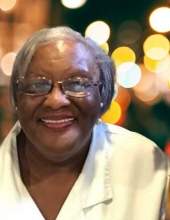 I have fought a good fight, I have finished my course, I have kept the faith: Henceforth there is laid up for me a crown of righteousness, which the Lord, the righteous judge, shall give me at that day: and not to me only, but unto all them also that love his appearing. 2 Timothy 4:7-8 Mildred Loretta Hamilton Harris was born August 4, 1949, to the late Reverend June Hamilton and the late Mary Mildred Hubbard Hamilton. She transitioned to be with our Lord in Glory on Friday, March 19, 2021 at the age of 71. Mildred, better known as “Loretta,” to most and fondly referred to as “Oldest” by her sisters, was well known for her loving attitude. She enjoyed living, loving, dancing, laughing, and rejoicing with people from all walks of life. Loretta was educated in the Stanly County school system and worked various jobs. She believed in keeping her home very neat and clean. Helping others with their cleaning was one of her special abilities. Loretta loved the Lord and was especially excited to serve as an usher. Her home church was Galilee Missionary Baptist Church in Oakboro North Carolina. She served faithfully at New Parkers Grove in Wadesboro, North Carolina, first under Bishop Walter Ellerbe and then under her sister Pastor Sandra Ellerbe. Loretta joined First Baptist Church in Wadesboro, North Carolina under Pastor Gregory Everett and served faithfully from 2010 – 2021. Studying God’s Word was important to her and her attendance at Sunday School and Bible Study was regular. She served on the Culinary Ministry and she shined as a member of the Usher’s Ministry. Loretta believed in showing God’s love and making people feel welcomed. Her gift for ushering was noticed by many and she could be found serving as an usher within the Zion Association, other churches in the community, and at funeral services in the community. She also enjoyed traveling and being a part of Black Church Leadership Conference in Asheville and being a faithful part of the First Baptist church Women’s Conferences. She also sang with the Senior Choir and as it is well known among her family and friends, her favorite song was “I Love the Lord”. Mildred Loretta Hamilton Harris was preceded in death by her parents, June and Mary Hamilton; five brothers: Lynwood Hamilton, Amos Timothy Hamilton, Randy Dale Hamilton, and two older brothers; 5 sisters: Shirley Hamilton Davis and four older sisters. She leaves to cherish her loving memory, her son, Lenox Lavonne Hamilton and the mother of her grandchildren, Michelle Parker; her grandsons: Cordaris Hamilton, Corey Hamilton and Cornelius Hamilton and their sister, Amber Parker; four brothers: Willie Hamilton, Charles Hamilton, Ernest Hamilton, and Jesse Hamilton; four sisters: Emma Broadway (JV), Reverend Judy Little (Oscar), Pastor Sandra Ellerbe (Bishop Walter), and Shelia Gaddy (Pastor Arland); Godchildren: Ken Caulder, Glenn Caulder, Derek Hunter, Anthony Sholar, Anita Ponds, Robert Mims, Vicki Burns, Deitra Threadgill Warwick and Darryl Ledbetter; two uncles: Mitchell Hubbard and James Hubbard (Louise); a host of nieces, nephews, cousins, and friends. Many lives have been touched by Loretta’s life and ministry. We are confident she heard the words of her Lord and Savior, “Well done good and faithful servant, enter now into the joys of thy Lord.” The Homegoing services for Mother Harris will be 1:00 pm Saturday, March 27, 2021, at Leavitt Funeral Home in Wadesboro. Interment will follow in Stanly Gardens of Memory in Albemarle. Mother Harris will lie in repose on Thursday, March 25, 2021, from 1:00 pm until 5:00 pm and on Friday, March 26, 2021, from 10:00, am until 5:00 pm at the funeral home, and family and friends may pay their respects and sign the guest register. The family will be meeting at the home of her sister and brother-in-law, Rev. Judy and Oscar Lee Little on Dora Street in Wadesboro.
To order memorial trees or send flowers to the family in memory of Mother Loretta Hamilton Harris, please visit our flower store.