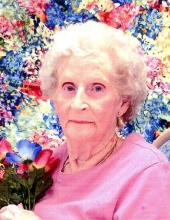 LILESVILLE – On Friday, August 21, 2020, following a long life of 99 years, Mrs. Nelline Adcock Clark, entered into eternal rest. There will be a service by the graveside in Forestville United Methodist Church Cemetery with Rev. Sybil Perrell and Rev Tim Hushion officiating, on Wednesday, August 26, 2020 at 11:00am. The family will greet friends following the service. Nelline was born April 14, 1921 in Anson County, NC and was a daughter of the late Archie A. Adcock and the late Susie Newton Adcock. She was a 1939 graduate of Lilesville High School and had worked mostly in textiles, working at Klopman Mills in Rockingham and later Wade Manufacturing in Wadesboro. She was a long-time member of Forestville United Methodist Church. Nelline remained very active in her community until declining health prohibited her to continue. She volunteered many hours in the community working at the annual Ingathering at Forestville Church and 10 years at Lillie Bennett Nursing Center. Her service at Lillie Bennett followed her husband being a resident there for 3 years and when the time came for her to need further assistance in health care, she became a resident there for 15 years. The family will remain eternally grateful for all the love and care they have given Nelline for so many years while volunteering and being one of their residents. She has left behind her children, Bill Clark of Wadesboro and Becky Morris of Lilesville; her grandsons, Trey Clark (Leslie) of San Diego, CA, Alex Swire-Clark (Ginger) of Easley, SC and Mark Morris of Lilesville and her great-grandchildren, Emma Grace, Jude, Jillian, Thea, Phoebe, Ida Rose, Henry, Evan, Noah, and Katherine. In addition to her parents, she was preceded in death by her husband, George William Clark, her daughter-in-law, Jane Clark and her son-in-law, Doug Morris. The family suggests that in lieu of flowers, family and friends might consider a memorial contribution to Forstville United Methodist Church, P.O. Box 452, Lilesville, NC 28091 or to Anson Health and Rehab, Activity Department, 405 S. Greene St., Wadesboro, NC 28170. The arrangements are in care of Leavitt Funeral Home. Online condolences may be made at www.leavittfh.com
To order memorial trees or send flowers to the family in memory of Nelline Adcock Clark, please visit our flower store.