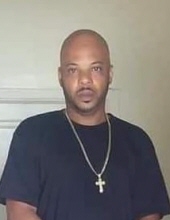 On Tuesday, February 1, 2021, Mr. Niki Donte Colson, 38, passed away peacefully at his home. He was born November 23, 1982 in Mecklenburg County, NC and was a son of Linda Faith Colson Tillman (James) and Deacon Rickey Anthony Watson (Shannon) Niki was educated in the public schools of Anson County and had worked as a sanitation worker at Pilgrim’s Pride and Perdu farms. He loved time spent with his family and enjoyed playing basketball and baseball. Those left to cherish his memory, in addition to his parents, are his brothers and sisters, Ricky Colson, Ericko Watson, Tajah Watson (Jessica), Daekwon Garmon, Jarrell Watson, Chanka Ingram, REbee Rollins and Cierra Gatewood; his grandmother, Barbara Leak; his grandfather, Bannie McCoy; children of the heart, Serress Tiana Wiggins and MaKayla Teal; and a host of aunts, uncles, cousins and friends. He was preceded in death by his sister, Connie Colson and grandparents, Roosevelt Smith and Alexander Frances Rosebud Watson. Funeral services will be 2:00 pm Wednesday, February 10, 2021, in the Chapel of Leavitt Funeral Home in Wadesboro. Public viewing will be Tuesday, February 9, 2021, at the funeral home from 3:00 pm until 6:00 pm.
To order memorial trees or send flowers to the family in memory of Niki Dontae Colson, please visit our flower store.