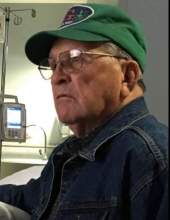 WADESBORO – Mr. Joseph Olin Boone, Sr., 81, died Wednesday, November 11, 2020 at his home. Funeral services will be 2:00pm Sunday, November 15, 2020 at Faith Baptist Church with Rev. Donnie Helms and Rev. Jimmy Knotts officiating. Interment will follow in Jowers Cemetery. The family will greet friends one hour prior to the service at the church. Olin was born February 2, 1939 in Kershaw County, SC and was a son of the late Joe Boone and the late Annie Gainey Boone Williams. He was retired from Anson Wood Products with 45 years of service. He was also a life-long farmer. This being instilled in him during his childhood and following the death of his father, he stepped up to help his mother care for his younger siblings. In the eyes of his family he was the hardest working man they knew. He was the last John Wayne. Following retirement, Olin enjoyed hanging out at Tim’s Convenience Store, drinking coffee, hanging out with his buddies and flirting with the ladies. His buddies, Tim Treadaway, Bill Ratliff, Dale McRae, Puddin Black, Thomas Garrison, Christ Randall, Gary Lear, Ted Stegall, Greg Thomas, Kenny Simon and Donnie Benton served as pall bearers at his request. Surviving are his children, Jo Ann Gilmore (Terry) of Albemarle and Joe Boone (Melissa) of Fairview; his grandchildren, Eli Gilmore of Albemarle, Skylar Boone of Lilesville and Taylor Boone of Fairview and his brother and sister, T.F. Boone (Shelba) of Wadesboro and Brenda Layman (Patrick) of Greenville, SC and his nieces and nephews and their families. Jo Ann would like to especially thank Debbie and Joey Ricketts, Ronda and Donnie Helms and Linda Knotts for going above and beyond in helping her care for her daddy. In lieu of flowers, memorials may be made to Jowers Cemetery Fund, c/o, Joey Ricketts, 1230 Doc Wyatt Rd., Wadesboro, NC 28170. The arrangements are in care of Leavitt Funeral Home. Online condolences may be made at www.leavittfh.com Olin's family requests those in attendance to dress casual for the service.
To order memorial trees or send flowers to the family in memory of Olin Boone, please visit our flower store.