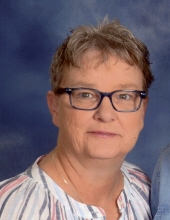 POLKTON – On Tuesday, October 6,2020, Mrs. Paula Hanna Tyson, 53, went to be with the Lord peacefully in her sleep. There will be a service at 1:00pm Friday, October 9, 2020 by the graveside in Red Hill Baptist Church Cemetery with Rev. Rodney Clements officiating. The family will greet friends following the service. Paula was born November 17, 1966 in Union County, NC and was a daughter of Edna McLester Weidner and Paul Eugene Hanna. She was a graduate of Anson Senior High School and furthered her education at Anson Community College in Surgery Technician and later earned her degree in nursing. As a surgery tech, she enjoyed assisting in labor and delivery. She was a Licensed Practical Nurse and had worked at Lillie Bennett Nursing Center, Wadesboro Health and Rehab and prior to her retirement at Atrium Health Stanly in Albemarle. Paula was an excellent nurse and always put the needs of others before her own. Those left to cherish her memories are her husband of 35 years, Greg Tyson; her sons, Alan Tyson (Kimberly) of Wadesboro and Adam “Bubba” Tyson (Taylor) of the Burnsville Community; her grandchildren, Easton, Baylin, Madison and Carter Tyson; her mother, Edna M. Weidner of Wadesboro; her sisters, Angie Levy \(Steve) of Zebulon and Hollie Willis (John) of Wake Forest; her nieces and nephews, Megan Robinson (Jordan) of Wilmington and Amanda Levy, Avery Willis and Morgan Willis all of Wake Forest; her mother-in-law, Katherine F. Tyson of Polkton; her brother-in-law, Willie Tyson (Linda) of Polkton; her sister-in-law, Jayne Tyson of Norwood and her Tyson nieces and nephews, Jennifer Hicks (Robert), Michael Tyson (Erica), Ashley Bartrug (Patrick), James Tyson (Mairy), Matthew Tyson (Sarah) and Brittany Tyson and their families. Paula always be remembered as a loving and devoted wife, mother, grandmother, daughter, sister and friend. She loved her and Greg’s families dearly. In lieu of flowers, memorials may be made to Red Hill Baptist Church Brotherhood, P.O. Box 207, Ansonville, NC 28007. The arrangements are in care of Leavitt Funeral Home. Online condolences may be made at www.leavittfh.com
To order memorial trees or send flowers to the family in memory of Paula Hanna Tyson, please visit our flower store.
Send a Sympathy Card

Social distancing, wearing masks and COVID 19 precautions requested for those in attendance.