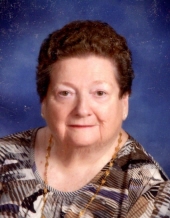 Chesterfield, SC Mrs. Peggy Eddins Leonard, 76, passed away peacefully on Sunday, March 4, 2018, at the Presbyterian Community Home in Clinton, SC. Funeral services will be 3:00PM Thursday, March 8, 2018, at Long Pine United Methodist Church with Rev. Chuck Marbry officiating. Interment will follow in the church cemetery. The family will greet friends at the church one hour prior to the service beginning at 2:00PM. Born June 13, 1941, Peggy was a daughter of the late Peter Raymond Eddins and Carrie Gaddy Eddins. She graduated from Deep Creek High School and from cosmetology school in Greensboro. She first worked with Mabel Horne in her beauty shop and later for a few years at Glenn Mfg. in Morven. Eventually she went to work for Weller Wire Wrap (Cooper) where she stayed for 27 years until her retirement. Peggy was a faithful member of Long Pine United Methodist Church where she attended until her health failed. She was married to Ervin Leonard who died in 2003. Survivors include a son, John Leonard (Julie) of Laurens, SC; one grandson, Jeremy Leonard; a sister, Betty Davis of Florence, SC; and a number of nieces and nephews. In addition to her husband, Peggy was preceded in death by a son, Vernon Leonard in 2010 as well as her brothers, Robert, James, Gene, Marcus and E.C. Eddins; and sisters, Ruth Eddins, Lib Pratt, Dot Wilkes, Louise Scott, and Corrine Ricketts. The family suggest memorials be made to the Long Pine UMC Cemetery Fund, c/o Kay Jones, 351 Hannah Rd., Wadesboro, NC 28170.
To order memorial trees or send flowers to the family in memory of Peggy Eddins Leonard, please visit our flower store.
Send a Sympathy Card