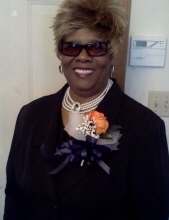 Morven - On Sunday, November 11, 2018, our Heavenly Father, the Author and Finisher of our faith, called home to be with him our beloved, wife, mother, grandmother, sister, aunt and friend, Mrs. Peggye Gean Harris Borden, while she was in the care of Carolinas Medical Center North East in Concord, NC. She was 65. Peggye was born July 21, 1953 in Anson County, NC and was a daughter of the late Thomas Fletcher Harris and the late Naomi McRae Harris. She was a 1971 graduate of Bowman High School and had worked for a number of years in the textile industry and had worked at Perdue in Rockingham. She had also worked with her daughter-in-law, at Angela Bordens Daycare in Morven. She was a faithful member of Saron Missionary Baptist Church in Polkton, NC where she served as church clerk and Vice President of the Pastors Aide Society, both for 6 years. She also sang with the choir and was actively involved in the other ministries of the church. Peggye is survived by her husband, Luther Borden of the home; her children, Antonio Maness of Polkton, Timothy Borden (Angie) of Wadesboro, Katrina Williams (Freddie) of Monroe, Michael Harris (Gayle) of Matthews and Christopher McNeil (Latoya) of Morven; her nephews and nieces, whom she cared for as her children, Wiley Harrell (Lavonda), Miranda Harrell and Kevin Harrell all of Morven, Jared Harrell (Iyana) of the United States Military stationed in Germany, Darren Harrell of Charlotte and Jasmine Harrell of Raleigh; her brother, Jimmy McRae of New York;her aunt, Josephine McRaie of Burlington; her sister-in-law, Mary Harris of Morven; her brothers-in-law, Orzo Borden and George L. Borden both of Wadesboro and Julius Borden (Jennie) of Polkton; her grandchildren and their families, as well as, many nieces and nephews, and a host of other relatives and friends. In addition to her parents, she was preceded in death by her sister and brother, Mary Lilly Harrell and John Thomas Harris Funeral services will be 2:00pm Saturday, November 17, 2018 in the Chapel of Leavitt Funeral Home with Rev. Eddie Lee officiating. Interment will follow in Saron Missionary Baptist Church Cemetery in Polkton. The family will greet friends from 6:00pm until 7:00pm Friday, November 16, 2018 at the funeral home.
To order memorial trees or send flowers to the family in memory of Peggye Harris Borden, please visit our flower store.
Send a Sympathy Card