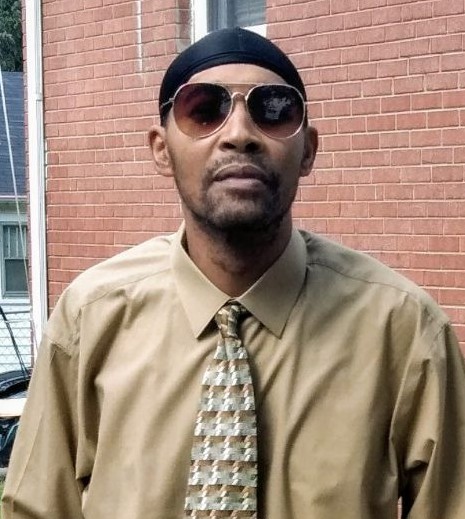 Thomasville - Percy Marque Kearns, also known to family and friends as "Sweet Pea" or as his mother would call him “Marque”, is the son of Claydes Leonard and Percy Kearns. Percy was born on May 13, 1974, in Wadesboro NC. On Saturday August 13, 2021, our Heavenly Father softly called Percy home.

Percy attended school at North Davidson high school, where he played football and graduated with the class of 1992. He then went on to serve in the National guard for two years.
Percy loved the outdoors. In his free time, he would spend the whole day fishing with his good friend Pablo. When he wasn’t fishing with Pablo and spending quality time with his family you would find him talking “Politics” with long life friendCharles(Chuck) or hanging with his buddy Sherman and their crew. Anyone who knew Percy, knew he was a diehard New England Patriots fan!
Percy was preceded in death by his father Percy Lee Kearns and stepmother Siloa Kearns.
He leaves to cherish his memory his loving partner of 27 years Tracie Mashore; two daughters DeAnna Bowman and DeNise Kearns both of Thomasville, NC; one son DeAndre Kearns of Thomasville, NC; parents Claydes and Claud Leonard of Wadesboro, NC; one sister Ebony Kearns of Columbia, SC; one brother Zachery Kearns fo Thomasville, NC; special aunt and uncle Vernetta Simon and Colin Lewis; God mother Anna Tamonie, a host of aunts and uncles, cousins, family and friends.

Visitation is from 9:00 am until 11:00 am Saturday at the church prior to the service.

Burial will be at 4:00 pm Saturday at West Deep Creek Baptist Church Cemetery in Wadesboro.

To order memorial trees or send flowers to the family in memory of Percy Marque Kearnss, please visit our flower store.
Send a Sympathy Card