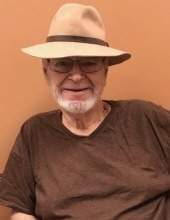 WADESBORO Mr. Richard Bryant Honeycutt, 74, died Thursday, November 22, 2018 at Hospice of Union County in Monroe. Funeral services will be 2:00pm Tuesday, November 27 2018 in the Chapel of Leavitt Funeral Home. The family will greet friends one hour prior to the service on Tuesday at the funeral home. Richard was born July 8, 1944 in Anson County, NC, a son of the late George Washington Honeycutt and the late Bertha Starling Honeycutt Ricketts. He was a graduate of Anson High School and attended Anson Technical Institute (now South Piedmont). He had worked at Coffing Hoists in Wadesboro and as a correctional officer at Brown Creek Correctional Center in Polkton. He was well-known for his photography in and around Anson County. Surviving are his daughter and son-in-law, Jill and Tommy Freeman of Albemarle; his daughter-in-law, Kim Honeycutt of Monroe; his grandchildren, Ali Freeman of Troy, James Freeman and Emma Freeman both of Albemarle, Whitney Honeycutt and fianc, John Diehl of Monroe and Sydney Honeycutt of Charlotte; his great-granddaughter, Layla Grayce Freeman; his sister and brother, Shirley Harward of Peachland and George Honeycutt of Newport News, VA; his step brothers and step-sister, B.J. Ricketts and Earl Ricketts both of Wadesboro and Carolyn Brewer of Rockingham. He is also survived by his devoted canine companion, his lab, Bue. In addition to his parents he was preceded in death by his son, Richard Bryant "Rick" Honeycutt, Jr.; his step-father, Evan Ricketts and his step-sister and step-brother, Betty Baldwin and Paul Ricketts. In lieu of flowers, memorials may be made to Hospice of Union County, 700 W. Roosevelt Blvd., Monroe, NC 28110. The arrangements are in care of Leavitt Funeral Home. Online condolences may be made at www.leavittfh.com
To order memorial trees or send flowers to the family in memory of Richard Bryant Honeycutt, please visit our flower store.