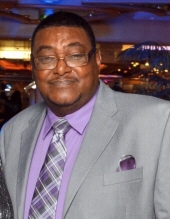 On the eve of Fathers Day, Saturday, June 16, 2018, our Heavenly Father whispered into Rickys ear and said, "It is now time for you to give up the Ghost." Although Ricky was determined that "he may give out, but would not give up," he submitted to the call of God and entered into eternal rest at approximately 11:00 PM at his home in Morven, North Carolina surrounded by his wife, children, grandchildren, sisters, brothers, nieces and nephews. Oh, what a great family reunion! Ricky Johnson, 65, was born in Morven, NC on February 7, 1953 to the late Willie Mae Watson Johnson and Lemar Johnson. Seeking spiritual guidance and acknowledging the Biblical teachings of his parents, Ricky accepted Christ as his personal savior at an early age, and joined the Galilee A. M. E. Zion Church, McFarlan, NC, serving as an usher, steward, and choir member. He later became a Charter Member of the New Life Christian Faith Church in Morven, NC where he served as an usher, trustee, and choir member. Because of his faithfulness and commitment to God and the Church, he was ordained to serve as a Deacon in this ministry. He also served in the position of Senior Deacon for the Beauty of the South Masonic Lodge #75, Prince Hall Affiliated, located in Morven, NC. Ricky was educated in the public schools of Anson County, NC. He graduated "Thank You Lordy" from Bowman High School in 1971. Rickys father always said Ricky was the smartest of all of his 10 children as he always passed his classes but never saw him with any books. After graduation, Ricky went into the workforce obtaining his first real job as supervisor at Glenn Manufacturing Company. In 1974, he became employed at Duff-Norton Company in Wadesboro, and remained there until he retired after 37 years of service. Growing up in Morven, NC, Ricky enjoyed hunting, fishing, coaching the Galilee girls and boys softball teams, and playing a card game of spades with his family and friends. He had great cooking skills and was considered the Johnson Family Grill Master as he planned the family cookouts and grilled food for the entire clan until his health failed. Ricky enjoyed being around young people, as he was also a Boy Scouts Troop Leader, mentoring young boys on how to become men. Ricky was the fun-loving brother and uncle of the Johnson family. His nieces and nephews loved to be in his presence, as he always made them feel special. He had nick names for all of them, even the great nieces and nephews. When they needed a listening ear or sought his guidance, he provided just what each of them needed with love. They respected him but could always be themselves around him. He will be sorely missed by them. Ricky never met a stranger and had a heart of gold. You could never forget him once you came into his presence. After he was healed from a broken vertebrae in his back in 2008, lung cancer in 2010, and a bout of pneumonia that hospitalized him for over a month, he freely shared his testimony of Gods healing and goodness to him with others. When his doctors diagnosed him with Myelodysplastic syndromes, a rare group of disorders in which your body no longer makes enough healthy blood cells, and told him there was no cure, he continued to trust that God had healed him before and was the same God who could do it again. When the doctors told him he only had a few days to live, he adamantly told them he was believing Gods report and declared he would not die until God says so! Rickys ailing body was unable to keep up with his fighting spirit. Each time we thought he was down for the count, hed rise back up! Although his healing did not take place on this side of Heaven, he knew he would soon have a new, glorified body, free from blood transfusions, disease, and pain. On September 21, 1974, Ricky married his high school sweetheart, Lyra Gwenetter Norton. They were an amazing couple that showed what real agape love for each other was all about. Lyra remained faithful and committed to her marriage vows to Ricky, as she stayed by his side during every hospital stay and doctor visit. She did whatever she could to bring him comfort to the very end. In addition to his parents, Ricky was preceded in death by his oldest brother, Vernon Johnson, sister, Australia McDuffie, and youngest brother, Stacy Pegues. Although a link in our family chain has been removed, we who remain are comforted by the long-lasting memories of Ricky and the joy of knowing that to be absent from the body is to be present with the Lord. The love and sacrifices Ricky gave will be forever etched in the hearts and minds of his wife of over 40 years, Lyra N. Johnson; son, Rev. Reco D. (Quantelya) Johnson; daughter, Nikki G. (Benjamin) Turnage; grandchildren, Justice, Nikalus, Nykaiya, Trenton, Trinity, Noel, Casey Jr., Dayasia, and Trey; Sisters, Rev. Elease (Cary) Powe, Elder Leomi (Rev. Grover) Powe, Maggie (James) Crawford, Dr. Debbie Taylor, and Lisa (David) Melton; brothers, Rev. Lorinzer (Hattie) Johnson, and Rev. Lynwood (Larvia) Johnson. One aunt, Mrs. Johnsie Tyson of Pageland, SC; six sisters-in-laws, Kathin Pegues, Miriam Norton, Rev. Mary (Rev. Larry) Little, Donna (Robert) Moore, Susie Norton and Betty Norton; one brother-in-law, Walter Norton. Ricky also leaves cherished memories with his spiritual brother and sister, Deacon Daniel Taylor and Judith Bennett, and a host of nieces, nephews, cousins and friends. Funeral services will be 11:00am Thursday, June 21, 2018 at Ebenezer Missionary Baptist Church with Pastor Phyllis Gill giving the eulogy. Interment will follow in Anson Memorial Park. The family will greet friends from 5:00pm until 7:00pm Wednesday, June 20,2018 at Leavitt Funeral Home and other times at the home.
To order memorial trees or send flowers to the family in memory of Ricky Johnson, please visit our flower store.
Send a Sympathy Card