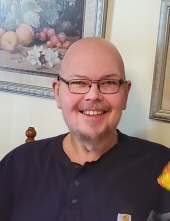 WADESBORO- Ricky Brien Williams, 48, died peacefully, surrounded by his family and loved ones, on Sunday, August 1, 2021.

Services will be 4:00pm Wednesday, August 4, 2021 in the Chapel of Leavitt Funeral Home with Rev. Randy Swaringen officiating.

The family will greet friends at the funeral home one hour prior to the service on Wednesday.

Ricky was born in Anson County on March 8, 1973, a son of Jill Benton Trammell and the late Richard Eugene Williams. He was a graduate of Anson High School class of 1991. Ricky worked for J. T. McRae building houses and later was employed with CMH Flooring, now JJ Haines, until his declining health.

Surviving are his wife of 23 years, Chasity Ricketts Williams of the home; his sons, Dylan (Taylor)Williams, Garrett (Lanie) Williams, and Austin Williams all of Wadesboro; his grandson, Maxton Williams; his mother, Jill Benton Trammell, and stepfather, Bill of Wadesboro; his sister, Tammy Williams Burroughs, and brother-in-law, Dwight.

In addition to his father, he was preceded in death by his maternal grandmother, Frances Dawkins Benton; and paternal grandparents, Dan and Christine Williams.

In lieu of flowers, contributions may be made to assist with funeral expenses by using the Crowdfunding link on the obituary and website.

To order memorial trees or send flowers to the family in memory of Ricky Brien Williams, please visit our flower store.