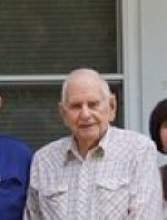 Ansonville - Mr. William Robert Ingold, 93, died Friday, July 5, 2019 at Atrium Health Anson in Wadesboro. Funeral services will be 3:00pm Sunday, July 7, 2019 in the Chapel of Leavitt Funeral Home with Rev. Curtis Laney officiating. Interment will follow in Bethlehem Cemetery in Ansonville. The family will greet friends one hour prior to the service Sunday at the funeral home. Robert was born January 15, 1926 a son of the late Joshua Chalmers Ingold and the late Sallie Mae Poe Ingold. He was a graduate of Ansonville High School and Anson Technical Institute. He was a veteran of the United States Navy, stationed aboard the USS Vicksburg CL 86 during World War II. Surviving are his children, Mike Ingold (Barb) of N. Ridgeville, OH and Denise Coltrane (Clark) of Archdale;his grandchildren, Jesse Wagoner (Donna) of Kannapolis, Christy D'Agostino (Nick) of Strongsville, OH, Kelly Spiedel of Olsted Falls, OH, Rob Ingold (Brittney) of Brunswick, OH, Jennifer Black and Lee Coltrane (Kelsie) both of Archdale; 8 great-grandchildren; his sister, Louise Dula (Gid) of Ansonville and a nephew, Larry Edwards of Ansonville, who was his next door neighbor and devoted friend as well. In addition to his parents, he was preceded in death by his wife, Marion Hildreth Ingold and his brother, Ross Ingold. In lieu of flowers, memorials may be made to Bethlehem Cemetery Fund, c/o, Charlotte Crenshaw, P.O. Box 421, Ansonville, NC 28007. The arrangements are in care of Leavitt Funeral Home. Online condolences may be made at www.leavittfh.com
To order memorial trees or send flowers to the family in memory of Robert Ingold, please visit our flower store.