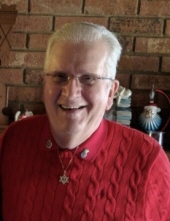 CHARLOTTE – Mr. Rodney Kristen Russell, 78, of Charlotte and formerly of Wadesboro, passed away at his home in Charlotte on Saturday, August 1, 2020. Funeral services will be 3:00pm Wednesday, August 5, 2020 in the Chapel of Leavitt Funeral Home, Wadesboro. Interment will be in Anson Memorial Park. The family will greet friends one hour prior to the service on Wednesday at the funeral home. Rodney was born August 3, 1941 in Anson County NC and was a son of the late John Travis Russell and the late Georgia Elizabeth Trexler Russell. He was a graduate of Wadesboro High School and received a Bachelor of Science Degree in Accounting from the University of North Carolina at Charlotte in 1976. He was a veteran of the United States Air Force, having served during the Vietnam War, retired from AEA Technology in Mooresville and a member of Hickory Grove Baptist Church in Charlotte. Left to cherish his memories are his wife of 58 years, Barbara Carter Russell; his sons, Keith Russell and Brett Russell and wife, Michelle all of Locust; his granddaughters, Trisha Bui and husband, Anthony of Charlotte and his great-grandchildren, Alyssa and Tai. In addition to his parents, he was preceded in death by his brother, John T. “Sonny” Russell, Jr. and his father-in-law and mother-in-law, Ben and Janie Kate Maxwell Carter. In lieu of flowers, memorials may be made to Hickory Grove Baptist Church, 7200 E. WT Harris Blvd., Charlotte, NC 28215 or to Forestville United Methodist Church, P.O. Box 452, Lilesville, NC 28091. The arrangements are in care of Leavitt Funeral Home. Online condolences may be made at www.leavittfh.com
To order memorial trees or send flowers to the family in memory of Rodney Kristen Russell, please visit our flower store.

Social distancing and COVID 19 precautions will be in place and suggested.

Social distancing and COVID 19 precautions will be in place and suggested.