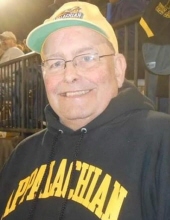 Jackson GA- Mr. Ronald Davis (David) Treadaway Jr, 61, passed away peacefully at Piedmont Hospital in Atlanta GA Friday, May 29, 2020 due to complications from open heart surgery. David was born October 27, 1958 in Wadesboro, NC and was the oldest son of the late Ronald Davis Treadaway Sr. and Louise Knotts Treadaway. David was a 1977 graduate of Bowman Sr. High School and a 1981 graduate of Appalachian State University where he studied Interior Design and Art. He worked for a number of years in the furniture industry, designing show rooms and working in sales. Surviving are his partner and spouse of 36 years, Tony Smith of Union Mississippi; his mother, Louise Treadaway of Wadesboro; his brother Mark Treadaway (Rhonda) of Wadesboro; his niece Tiffany Nelson (Chris); and his nephew, Jonathan Treadaway of Wadesboro. Also surviving are his mother-in-law, Carolyn Smith of Meridian, MS; and sisters-in-law Tammy Smith (Melissa) of Meridian, MS and Teresa Smith Harris (Everette) of Union, MS. A memorial service to celebrate David’s life will be held at 3:00pm on Saturday, July 11, 2020 in the Chapel of Leavitt Funeral Home. Visitation will be one hour prior to the service at the funeral home. In lieu of flowers, memorials can be made to one of David’s much loved philanthropies – St. Jude children’s hospital in Memphis, TN. The family is accepting condolences at this time via telephone: 404-291-0023 (Tony) and 704-694-4311 (Louise) and also at the home of his mother, Louise Treadaway, 306 Briarcreek Court, in Wadesboro.
To order memorial trees or send flowers to the family in memory of Ronald Davis "David" Treadaway, please visit our flower store.