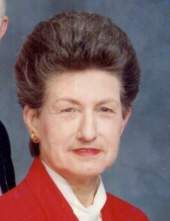 LILESVILLE – Mrs. Rowene Morgan Bacon, 92, peacefully died Tuesday, May 25, 2021 at Anson Health and Rehab with her sons by her side. Funeral services will be 11:00am Wednesday, June 2, 2021 at Forestville United Methodist Church with Rev. Sybil Perrell officiating. Interment will follow in the church cemetery. The family will greet friends following the service in the church fellowship hall. Rowene was born October 12, 1928 in Union County, NC and was a daughter of the late Frank Morgan and the late Eva Moser Morgan. She was a 1945 graduate of Marshville High School and a 1947 graduate of Gardner Webb College, where she was President of the student body her senior year. Following graduation from college, Rowene returned to her hometown of Marshville where she worked with her father at Morgan Lumber Company. It was at a square dance in Marshville where she met her future husband, John Edward Bacon. She and John Edward were married October 3, 1954 in First Baptist Church, Marshville where she was a member since childhood. Rowene and John Edward would make their home in Lilesville near the Pee Dee River. She was an excellent and devoted wife, mother and homemaker. She was a faithful member of Forestville United Methodist Church. After her marriage and moving to Anson County, she worked for Abbey Manufacturing, which would later become Wadesboro Manufacturing where she worked in the office for nearly 30 years prior to her retirement. Surviving are her sons and daughters-in-law, John Edward Bacon, Jr. and Connie of Cary and William Morgan Bacon and wife, Pam of Bolivia; her grandchildren, the twins, Haley Bacon Bennett and husband, Drew of Apex and Lindsey Bacon, and fiance’, Benjamin Williams of Cary and the girls, Kelley Griffin and husband, Brent of Leland and Crystal Wainright and husband, Nick of Rocky Point; her great-grandchildren, Casey and Abby Wainright and Greyson Morgan Griffin; her sister-in-law, Sarah Morgan of Monroe and her nieces and nephews and their families, which include two special nieces, Ann Cobb of Indian Trail and Judy Cannon of Roxboro. In addition to her parents, she was preceded in death by her husband of 65 years, John Edward Bacon and her brothers and sisters, Earl, Worth and Parks Morgan, Mildred Moore, Edna Young and Jean Tarlton. The family would like to express their sincere gratitude to all the staff of Anson Health and Rehab for the loving manner in which they cared for Rowene for the past nine years and to Hospice of Union County for their care and assistance most recently. In lieu of flowers, memorials may be made to Forestville United Methodist Church Cemetery Fund, c/o Joanne Clark, 1781 Clark Mtn. Rd., Lilesville, NC 28091. The arrangements are in care of Leavitt Funeral Home and online condolences may be made at www.leavittfh.com
To order memorial trees or send flowers to the family in memory of Rowene Morgan Bacon, please visit our flower store.

Visitation will follow the service in the church fellowship hall.