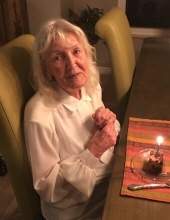 MORVEN - Sara Grace Morgan Short, 94, of Jensen Beach FL, formerly of Charlotte died peacefully on Sunday, July 22, 2018 at the Treasure Coast Hospice House in Stuart FL Sara was born January 11, 1924 in Ozark, AL, a daughter of the late J.L. Morgan, Sr. and the late Bertha Trexler Morgan and grew up in Morven NC until she and two of her sisters moved to the "big city" of Charlotte in the early 1950s. She was a woman before her time, as she bought a house as a single woman in 1955. Sara married four years later and lived there with her husband, Howard Short; mother, Bertha Morgan; brother, J.L. "Buck" Morgan, and daughter, Karen. She later moved with her daughter to St. Joseph, MI in 1999 and then to Jensen Beach, FL. in 2003. Sara was a caregiver and always wanting to help others. She was a sweet, soft spoken woman who loved the Lord. Even in the later years with dementia, her love for Jesus never ceased. She was always trying to go home to her mother and father or at times to her husband and now she is in Heaven with them all. Surviving are her daughter, Karen Hammond (Dale) of Jensen Beach, FL: sisters Mary Parker of Charlotte, NC and Ann Turner of Murphy, NC: five grandchildren and three great grandchildren. In addition to her parents, she was predeceased by her husband, Howard T Short; three brothers, Ervin Morgan, J.B. Morgan and J.L. "Buck" Morgan Jr; three sisters Daisy Morgan, Mildred Estridge and Carrie Mae "Tat" Nixon. A service to celebrate Saras life will be at 2:00 pm, Saturday, July 28, 2018 in the Chapel of Leavitt Funeral Home, Wadesboro. Interment will follow in Morven Cemetery. There will be a meal following the service at the cemetery in at Morven United Methodist Church. The family will receive friends on Friday, July 27, 2018 from 6:00 PM to 7:30 PM at the funeral home. The family would like to thank her home caregivers and the professional and compassionate staff at the Hospice of Martin & St Lucie. In lieu of flowers the family request that memorials be made to the Hospice of Martin & St Lucie; 1000 SE Ruhnke St, Stuart, FL 34994. Funeral Arrangements have been entrusted to Aycock Funeral Home in Stuart, FL. and Leavitt Funeral Home in Wadesboro, NC. Online condolences may be made at www.leavittfh.com
To order memorial trees or send flowers to the family in memory of Sara Grace Morgan Short, please visit our flower store.