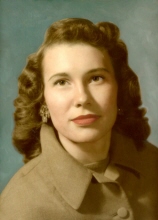 POLKTON Mrs. Sarah Cox Tucker Long, 88, died Monday, October 1, 2018 at Carolinas Medical Center Union in Monroe. Services will be 2:00pm Wednesday, October 3, 2018 by the graveside in Sharon Memorial Park in Charlotte. The family will greet friends following the service. Sarah was born December 16, 1929 in Anson County a daughter of the late John Thomas Cox and the late Ida Elizabeth Braswell Cox. Surviving are her granddaughter, Anna Tucker and her mother, Debbie Tucker both of Mint Hill, her grandson, Andrew Tucker, Jr. of Kent, England; her brothers and sisters, Louis Cox (Margie) of Matthews, Carson Cox (Alice) of Wadesboro, Ila Barwig of Monroe and Betty Pope (Jerry) of Peachland and her nieces and nephews and their families. In addition to her parents, she was preceded in death by her husbands, Jack Tucker and Bob Long; her son, Jack Tucker, Jr., and her brothers and sisters, Charles, Edward, Roy and Alma Cox and Frances Taylor. The arrangements are in care of Leavitt Funeral Home. Online condolences may be made at www.leavittfh.com
To order memorial trees or send flowers to the family in memory of Sarah Tucker Cox Long, please visit our flower store.
Send a Sympathy Card