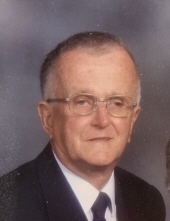 Mr. Steve Carpenter, age 87, died Thursday, October 8, 2020, while a patient at Carolinas Medical Center in Charlotte. A service to celebrate his life will be held at 5:00PM on Monday, October12th, by the graveside at Mt. Vernon United Methodist Church with Rev. J.D. Moffett and Rev. Fred Carpenter officiating. For those wishing to pay their respects, Mr. Carpenter will lie in state inside Mt. Vernon United Methodist Church between 4:00 and 5:00PM. The public is invited to both events. Born in Anson County on August 11, 1933, Steve was one of ten children born to Fred Perry and Ellen Inez Tucker Carpenter. He graduated local schools and worked nearly 34 years at the West Knitting Corp. until they closed. He also worked a number of years for API Security before retiring for good earlier this year. Steve was a capable and dependable worker who enjoyed both his job and the people he worked with and met. He was a lifelong member at his beloved Mt. Vernon Church where he could sometimes be heard playing the piano by ear – a gift he picked up when he was 14 years old. Steve’s favorite songs were those out of the old Cokesbury hymnal and he didn’t mind sharing his idea that a good worship service always contained more music in it than speakers! Survivors include his wife of 58 years, Sue McRae Carpenter of the home; three children, Kay Carpenter Smith (Mark) of Oakboro, Karla Carpenter Benton of Wadesboro, and Steve Carpenter, Jr. (Nichole) of Ansonville; five grandchildren, Brandy Laakso (Tim), Mandy Smith (Lee), Cody Smith (Matthew), Maddie Carpenter and EB Carpenter; two great-grandchildren, Kaylee Laakso and Melody Laakso; his sister, Frances High of Ansonville; and many nieces and nephews whom he dearly loved. In addition to his parents, Steve was preceded in death by his son-in-law, Robert “Mack” Benton; and eight of his other brothers and sisters. The family suggests memorials be made to Mt. Vernon United Methodist Church Cemetery Fund, c/o Joyce Meachum, 2139 Stanback Ferry Ice Plant Rd., Wadesboro, NC 28170.
To order memorial trees or send flowers to the family in memory of Steve E. Carpenter, please visit our flower store.