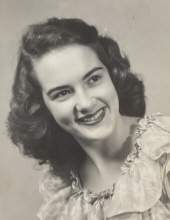 Sylvia was born September 15th, 1931 in Patrick, South Carolina to the late Joseph Dean Farris and the late Virginia Kelly Farris. She spent much of her youth growing up in Wadesboro, North Carolina, where she helped her mother raise Sylvia’s brother Linsy and was a graduate of Wadesboro High School. Sylvia and her family were members of First Presbyterian Church in Wadesboro.

As a young girl, Sylvia developed a love for music and singing. She was a student of voice and piano, having been taught by Miss Rachel Hamilton Rotella in Wadesboro. Her talents and gift of singing afforded her opportunities to be in pageants and contests including the Miss Wadesboro Pageant and the Peach Festival Pageant. She went on to sing at and attend Wingate Junior College and Queen’s College in Charlotte.

While attending college, she met a young man from Philadelphia named Edward Nickel at a Bachelors club dance in Charlotte, NC. He fell in love immediately and eventually she fell for him. They married on November 23rd, 1951.

Sylvia was a very supportive and loving wife who contributed to Ed’s success with Johnson Motor Lines after being transferred to New York. They eventually settled in Tenafly to raise a family. They had two children, Lisa and Eric, and lived around the corner from Sylvia’s brother, Linsy his late wife, Vivian and their three children, Karen, Alan and Andrew.

Sylvia and Ed were proud and active members of First Presbyterian Church in Englewood, NJ where she sang in the choir and they found many lifelong friends.

Sylvia and Ed followed their daughter to North Carolina when Lisa attended Wingate College to become a teacher. They both were instrumental in bringing up grandchildren Sara and Andrew.

In 2002, Sylvia and Ed moved to Mineral Springs to live with Lisa and to help care for the grandchildren. She loved gardening, baking birthday cakes, and sharing her wisdom on how to do most things.

Sylvia loved to read and spent much of the later part of her life caring for animals of many species she adopted over the years.

Among her last words were how happy she had been in her long and fulfilling life - in spite of her deteriorating health and chronic pain. She expressed gratitude to have shared her adult life with Ed, and spoke glowingly of how proud she was of her children, grandchildren, brother, nieces, nephews, and their families.

Sylvia is survived by her husband of sixty-nine years Edward Elmer Nickel; Her daughter Lisa Seegers, son in law Patrick of the home in Mineral Springs NC Granddaughter Sara Seegers and her partner Max Rogers of Charlotte NC Grandson Andrew Seegers of the home in Mineral Springs NC: Her son, Eric Nickel and his partner Sherry Childress of Statesville NC Grandchildren Ean and Savanna of Mooresville NC; Her brother Dr. Robert ‘Linsy’ Farris and his wife Ursula of Tenafly NJ Niece Karen Neus and her family of Tenafly NJ Nephew Alan Farris and his family of Waxhaw NC Nephew Andrew Farris and his family of Olney, MD.

There will be a service to celebrate her life at 3:30pm Wednesday, August 11, 2021 in the Chapel of Leavitt Funeral Home in Wadesboro. The family will greet friends following the service at the funeral home.

The family respectfully requests those in attendance to please wear a face mask and practice social distance, unless fully vaccinated.

Then to my raptured ear, Let one sweet song be given; Let music charm me last on earth,

And greet me first in heaven.

The arrangements are in care of Leavitt Funeral Home and online condolence may be made at www.leavittfh.com

To order memorial trees or send flowers to the family in memory of Sylvia Farris Nickel, please visit our flower store.

The family respectfully requests those in attendance please be fully vaccinated and to please wear a face mask and practice social distance.