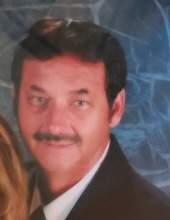 Polkton - Mr. Timothy L. Harrington, 58, died Friday, February 14, 2020. Funeral services will be 3:00pm Monday, February 17, 2020 in the Chapel of Leavitt Funeral Home with Rev. Luke Christy officiating. Interment will follow in Peachland Cemetery. The family will greet friends Monday one hour prior to the service and other times at the home. Tim was born July 10, 1961 in Anson County, NC, a son of Eloise Johnson Harrington and the late Joseph Leroy Harrington. He was a graduate of Bowman High School and had worked with his father in construction but is most noted for being a farmer. He was a poultry, cattle and crop farmer and also raised horses. He was an avid outdoorsman and especially enjoyed hunting. Time spent with his dog, Crush and horse Duke also made being outdoors even better for Tim. He was a member of Peachland United Methodist Church. Surviving are his wife, Monica Bartram Harrington; his sons, Dalton Meggs and Brandon Meggs both of Polkton;; his grandchildren, Kylie and Payton Meggs; his mother, Eloise Harrington of Polkton; his sister, Nancy Diggs (Eric) of Polkton; his brother-in-law, Randy Bartram (Carolyn) of Branchland, WV; sister-in-law, Amber Mullis (Wayne) of New Salem and his nieces and nephew and their families. In addition to his father, he was preceded in death by his daughter, Shelby Harrington. In lieu of flowers, memorials may be made to the American Diabetes Association, 1300 Baxter St #150, Charlotte, NC 28204. The arrangements are in care of Leavitt Funeral Home. Online condolences may be made at www.leavittfh.com
To order memorial trees or send flowers to the family in memory of Timothy L. Harrington, please visit our flower store.