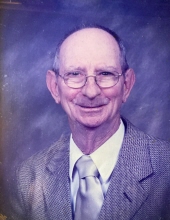 Wadesboro – Mr. Tommy Andrew Tice, Sr., age 89, died Wednesday, July 21, 2021, at his home. A service to celebrate his life will be held at 10:00AM Friday, July 23rd, at Leavitt Funeral Home. Interment will follow at Anson Memorial Park. The family will greet friends from 6:00 to 8:00PM Thursday at the funeral home. Born in Anson County on July 29, 1931, Tommy was a son of the late Frank Alexander and Donie Coppedge Tice. He served in the US Army during the Korean Conflict. Tommy worked a number of years for Ballet Hosiery and then for West Knitting Mills until it closed. He finally retired from the maintenance department of Carolina Power and Light at the Blewett Falls generating plant. Tommy loved fishing, gardening, and yard work of any kind. He also enjoyed raising chickens , looking after the family mule, Jack, and more recently enjoyed the company of his four-legged companion, Bella. Survivors include his three children, Tommy Tice, Jr. of Ramseur, Ralph Tice of Wadesboro, and Donna Clark (Kenny) of Lilesville; 8 grandchildren; 11 great-grandchildren; and 1 great-great-grandchild. Also surviving is a brother Billy Tice of Lilesville and a sister, Frances Rumbley (Larry) of Eden. In addition to his parents, Tommy was preceded in death by his wife, Sally Griffin Tice; two sisters, Betty Meachum and Mary Tice Newton; and five brothers, Charles Tice, Frank Tice, Robert Tice, John Tice and Richard Tice.
To order memorial trees or send flowers to the family in memory of Tommy Andrew Tice, Sr., please visit our flower store.
Send a Sympathy Card